Australia go into day three 311 runs ahead of the hapless tourists and will bat for as long as they want or until six more wickets fall – whatever happens first, Michael Clarke won’t mind.

When Australia do come out to bowl England out – or the visitors find a way to some bottle and break every trend they’ve set since arriving in Brisbane – it’ll be with a 34-wicket steam train charging in with what looks like fairy floss hanging under his nose.

The stumps are already pink, while both teams posed in pink caps before the first ball was bowled in the fifth Test.

But it’ll raise to a whole new level with the SCG a veritable sea of pink tonight (play begins at 11.30pm) with the crowd and commentators renowned for getting on board the fundraiser for the cancer charity begun by Glenn McGrath’s late wife Jane.

One more run added to Australia’s overnight total of 4-140 and England will need to beat their second highest total of the series, 312, on a Sydney wicket that was giving plenty to the seamers and turning for Nathan Lyon in their withering first innings of 155.

Chris Rogers will resume on a quickly compiled 73 while George Bailey has a chance to get himself on the tour to South Africa on 20 not out. 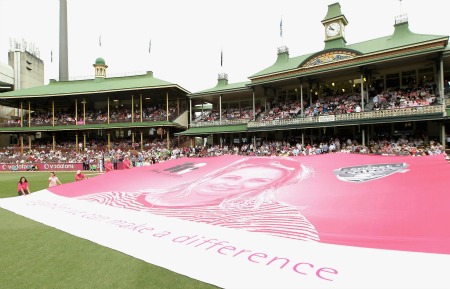 Images via Getty and Twitter/MitchJohnson398

Close call: Two women narrowly avoid being taken out by a train after running along the tracks