Here are the main features of the iPad 2

Faster
The iPad 2’s 1GHz dual-core Apple A5 processor is two times faster than its predecessor. Graphics performance is nine times faster, enhancing use of games and video-editing apps.

“The graphics on this thing are wonderful,” Steve Jobs said.

Built-in cameras
The iPad 2 features two cameras built into the rear and front of the device, both of which take photos and shoot video, optimising its for use with FaceTime video chat and other apps.

FaceTime can be used between two iPad 2s, between the iPad 2 and an iPhone or iPod touch, or between an iPad 2 and a Mac using FaceTime for Mac. 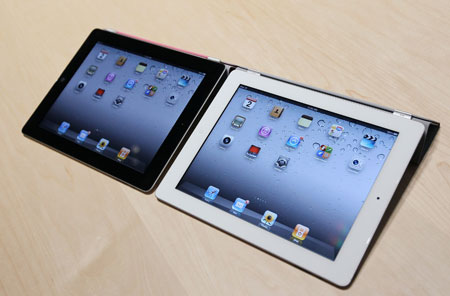 The iPad 2 will be available in black and white.

Photo Booth
The iPad 2 comes preloaded with a new app called Photo Booth, which allows people to take photos of themselves, modify them with effects and share them with friends. The Photo Booth app previews all effects on one-screen in real-time.

Gyroscope
The iPad 2 features a gyroscope (as does the iPhone 4 and fourth-generation iPod touch).

This means the tablet will know which direction the iPad is heading and how it’s moving, affect gaming and mapping apps by giving a 360-degree feel.

New Smart Cover
Apple has developed a new “smart” case for the iPad 2 which can hooks onto the hinges of the tablet and fold up into a stand.