Well, going to Fraser Island definitely gives you the opportunity to get to know the most serious people from another perspective.

So if you fancy spending days at the most beautiful lakes and beaches, and nights discovering the wildest personal traits of the guys you just discussed the international political situation with, then Fraser Island is the place to be!

After swimming in the breathtaking Lake McKenzie and throwing the frisbee around, the evening time approached and our crew arrived at the camping site – our jeep full of sand and us full of goon.

I reckon you haven’t really been to Fraser Island unless you slapped the goon (as a genuine backpacker, you know what it is, don’t you?) and sang funny songs in the back of the 4WD jeep!

As you all might have already experienced, the goon takes over your brain quite quickly, making it really difficult to continue elaborating on serious subjects, so as the night unfolded and the goon took over the control of our crowd’s behaviour, it was time to start the competition and show off very special skills – it was time for the ultimate Fraser Island Olympics!

The first competition involved singing your national anthem, a task easy to explain but hard to accomplish, especially after having drunk and sung the whole day through. 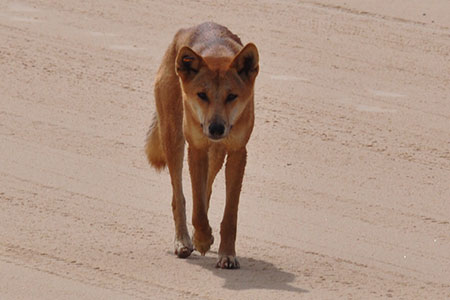 But there’s a lot at stake with a brilliant chance of winning yet another wonderful bag of the precious goon, so the political science student and the PhD girl give it a try and sing their anthem in full voice, getting a few lines wrong, but feeling confident and jolly.

They sway in a joyous hug and seem to enjoy their performance, when suddenly they are interrupted by the English-Canadian group, roaring the one and only anthem – the Liverpool football team song “You’ll never walk alone”. This provokes happy and loud reaction from other English people and the first competition ends up in a frolic chant of the united groups, enhanced by the howling of the wild dingoes.

In this harmonious unity it appears to be a real challenge to pick the winner, so the competition goes on.

The second part is supposed to be building a human pyramid, but is suspended because of a lack of obvious walking and standing stability in almost the whole group. But there is a solution! All of a sudden, somebody comes up with an idea to start a sexy dance competition – a job no one would possibly do, so I think. But I was wrong!

Upset by the previous interruption, the PhD friend grabs a chair, tosses her hair back wildly and starts swinging her hips in a very Shakira-like style!

Wow, the guys drop their jaws and also their glasses and can’t help but to come closer to the “stage” to have a look. Other girls won’t let her be at the centre of all guys attention and begin to move too.

All ends in a huge happy dancing routine, with occasional cheerful singing. The winner is announced – it’s our “Shakira!” She grabs her trophy as if it was her scientific achievement award and the “goon slapping” continues.

Yes, scientists also need a break from the ongoing serious contemplations. And one thing you can definitely be sure of at Fraser Island is that you’ll never dance alone in this beautiful surrounding!