The best parts of summer have finally been brought together in a magical pairing to rival even Ron Burgundy and Baxter. Soho’s Floridita Rum Shack has teamed up with award-winning gelateria Gelupo to launch an alcoholic gelato bar, serving bespoke rum-infused flavours including Cuban spiced chocolate rum (with cinnamon and chilli) and banana daiquiri sorbet. Yours for £3.50 per scoop. More weird ice cream on P12.

‘Caravan Sessions’ might sound like something you try to avoid doing with your parents each summer, but on Exmouth Market from July 22, the phrase is officially cool. Caravan restaurant, bar and roastery will be holding monthly Caravan Sessions, comprising a four-course dinner and bespoke cocktail list based around a theme.

First up is ‘Smoked, Pickled and Raw’, to be followed by ‘Brews & Blues’ in August and ‘Last Of The Summer Wine’ in September. Only 50 places available per session, costing £35pp. 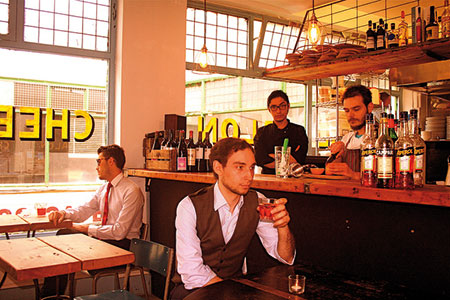 Another one to book in early is supperclub Backdoor Kitchen’s new Backdoor Salon adventure in Brixton on July 21 and 28, and August 4.

For a bargain £27, they’ll serve up a four-course, Italian-Spanish fusion brunch with cocktails, and you can choose to follow it up with their Aperitivo Experience (three tapas dishes and a cocktail) for an extra £15. The grub is seriously special and we can’t think of anywhere that’s better value.

Genia stays at Reds for love, not for money