A video of a cat and an owl playing together is racking up hits on Youtube.

Featuring Fum the cat and Gebra the owl, the video shows the unlikely friends frolicking in the countryside. 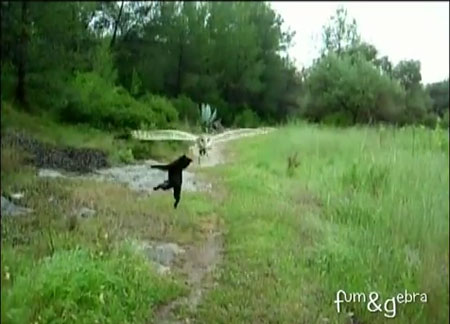 Fum the cat leaps at Gebra the owl.

In some scenes, Gebra the barn owl swoops low over Fum’s head as the cat leaps into the air, in others the pair rub up against each other.

On one occasion the owl is forced to give the cat a peck as a reminder to get too boisterous.

It’s not known how Fum and Gebra became friends or where they live, but the Youtube poster is Spanish.

Watch the cat and owl playing together


“Fum is a lovely black cat and Gebra a kind barn owl. This bird of prey fly far away but lands everytime near Fum, its faithful friend. Fum and Gebra have one year of age and have known they had a month,” says the video blurb on Youtube. 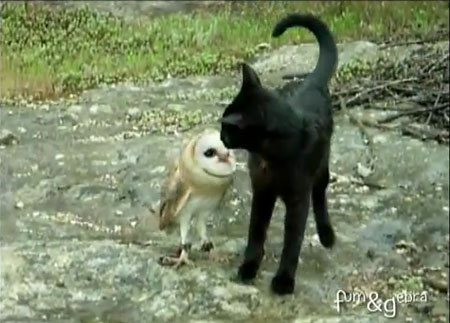 The cat and owl are best of friends, according to the Youtube video.

“The owl is held against her will (see the ropes on her legs that would prevent her from hunting on her own in the wild) and the so called “Cat” is just a “Kitten”.

The owl will most likely be killed in a few days or weeks when the kitten grows up.

There is absolutely nothing “cute” about this video when you know what is really going on,” wrote DataCutter. 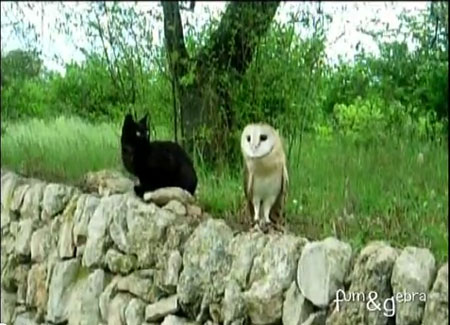 However, Coolcat233 disagrees, saying: “Lighten up! I’m sure if the owners thought or ever think they’re a threat to each other then they will stop the two playing with each other. And as for the owl being held against her will, the owl is either a pet or part of some reservation company which is basically saying all pets are wrong and I’m not going down that route.”