A gallant Ben Stokes fought off the hosts’ attack with a century but it wasn’t enough to stem the 150-run defeat in Perth that secures a 3-0 series victory with two Tests to go.

With just five wickets to fall on the final day, it was all over before 2pm at the WACA and it seemed only fair that Mitchell Johnson, who’s been destructive throughout the series, took the final scalp of James Anderson.

While this result is the least emphatic of the three Tests – after 381 and 218-run wins in Brisbane and Adelaide – there wasn’t a day of the third Test that Australia didn’t look in control.

England will now be looking to avoid a humiliating 5-0 whitewash, which Clarke said after the match was now his side’s target.

“Our goal is to get back to the number one team in the world,” said Clarke.

“We’ll celebrate hard and enjoy it but we’ve got two more Test matches. We’d love to win 5-0 in this series.” 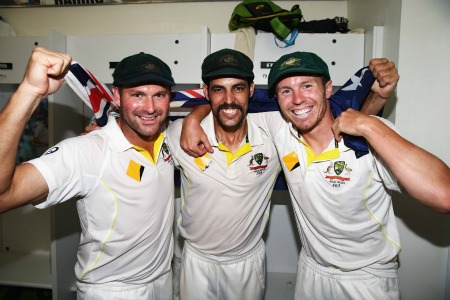 Stokes’ performance is an encouraging sign for the tourists, with his 120 out of 353 impressive in its application, technique and grit in the face of an insurmountable lead.

He put on a partnership of 76 with Matt Prior, but that was the closest to good news for Alastair Cook’s battered side.

Prior fell softly, caught behind off Johnson for 26, then went Stokes to Nathan Lyon has the crumbling WACA pitch saw one keep low and edge to Brad Haddin’s gloves again.

The victory is the seventh WACA win in a row for Australia.

England now have a significant break to lick their wounds with the next Test not until the traditional Boxing Day Test in Melbourne.

Rightly confident, Australia have named an unchanged 12-man squad yet again for the Melbourne Test including even James Faulkner, who broke his hand on the eve of the Perth fiver-dayer.