Barack Obama and David Cameron served up a BBQ at Downing Street in honour of British and American service personnel.

With Union Jack and Stars and Stripes bunting hanging overhead, Obama and Cameron stripped to shirtsleeves to BBQ sausages and burgers for the veterans at the No. 10 Downing Street bash. 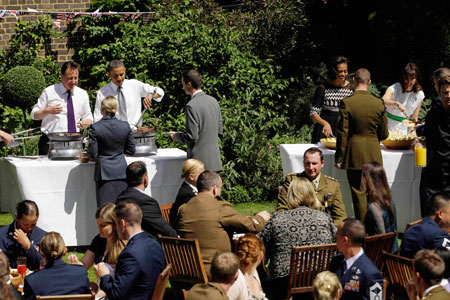 The BBQ was some light relief after a morning of intense talks during which Cameron and Obama discussed issues such as military campaigns in Libya and Afghanistan and global economic reform.

150 American and British service people attended the photo-op BBQ and were fed mash up of food from the two countries. 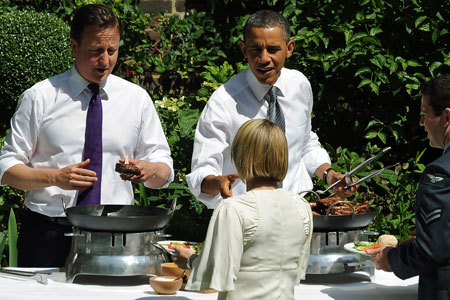 While world leaders Cameron and Obama wielded the tongs on the BBQ, their wives Samantha and Michelle gamely doled out side-dishes.

On the Downing St BBQ menu were:

Samantha Cameron came decked out in a short-sleeved, pale blue and white dress with a bright green belt, by Scottish designer Jonathan Saunders.

Meanwhile Michelle Obama wore an embellished black chiffon dress from the by US designer Tracy Reese. 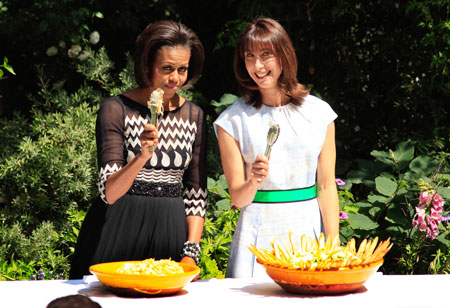 After the BBQ, the pair gave a joint press conference in which the Cameron said Taliban must make a “decisive split” with al Qaida if a political settlement in Afghanistan is to be reached.

Friday could be a hot one! Solar flare predicted for the 13th

World Cup 2010: Where to watch in London

Get thrifty: How to make do and mend in London