Hailing from the tiny Spanish island of Mallorca, Pig&Dan have toured the world with their powerful techno and tech-house sound – something which led to the likes of Inner City and Underworld clamouring for their remix touch. Since the launch of their own Elevate label the duo’s accent to the top of their sound has been assured, stopping off along the way to share their arsenal of tunes with the likes of Bedrock and Monika Kruse’s Terminal M.

Global talent agency, Blakksheep’s has seen Italy’s Drumcode signing Sasha Carassi soar into the electronic music stratosphere with releases on the esteemed label and key festival and Ibiza dates this summer. A favourite with Egg London’s techno faithful, its sure to be an unmissable set full of exclusives.

Elusive Bristol based producer Dubspeeka has also impressed with an array of releases over the past twelve months, joining labels such as Drumcode, Suara, Bedrock and Sasha’s Last Night On Earth after setting out on his very own Skeleton imprint in 2012. Alternately known as Darren Beale from Kosheen, he’s now exploring a more house and techno orientated sound under his Dubspeeka alias, bringing to this an unparalleled knowledge of bass carved out from his days making drum and bass.

Brazilian-born, London-based DJ Vinicius Honorio is raising eyebrows in the techno community with releases like ‘Ways Of Old’ on Pig & Dan’s Elevate and Dubspeeka’s Skeleton labels, with support from the likes of Alan Fitzpatrick and Drumcode head honcho Adam Beyer, and expect a fresh twist to everything he does. 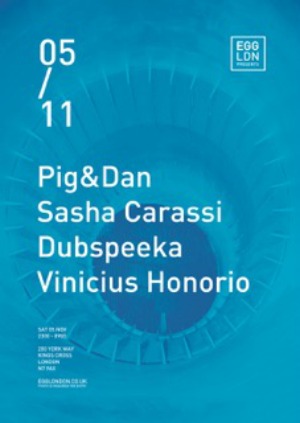