Forever surrounded by a sense of intrigue, Claptone aka the man in the golden mask known for his magical musical moments that transform dance floors across the glove including the recent ‘In The Beginning’, ‘Party Girl’ and the ‘Charmer’ remixes.  A renaissance man musically and personall, his collaborations include ‘Liquid Spirit’ for Gregory Porter (who just won a Grammy), Disclosure, Róisín Murphy and Jaw. Check out the new Raumakustik mix of ‘In The Beginning’ and ‘Charmer Pt 2’  alongside the regular Clapcasts he’s revered for. Other worldly catch him in shamanic sonic power with his Exclusive set at Egg London ahead of We R FSTVL.

Londoner Brett Gould is know for his original brand of rolling funky tech & deep house and recently heard firing it up on Monki and Skream’s session www.mixcloud.com/corenewsuploads/monki-2017-01-16-skream-in-control-brett-gould-lights-on-mix/. With releases on Toolroom, Lapsus, Snatch and his latest ‘Say It Loud’ out on Glasgow Underground following on from the huge ’All Of A Sudden’, make a date to catch this rising star.

K & K Music’s ‘Peaceful Crowd’ on Sleazy Tech was one of the tunes of the last quarter of 2016, supported by Annie Mac, Danny Howard, Claptone, Sam Divine and Tough Love going on to clock up 3 months in the House Top 100 on Traxsource and Beatport’s Tech House Top 100.

Their new “Underground” track came out on Marshall Jefferson’s Freakin 909 label and ”The Maze” EP is due on King Street Sounds Tech label, Street King alongside remixes on Sleazy Tech and a remix on Daylight Robbery. 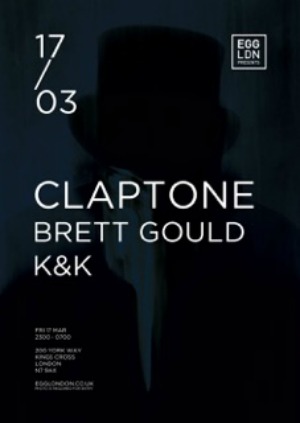 File sharing recognised as a religion in Sweden

Korn at the Brixton Academy