Delicate bridges and waterways weave in and out of old brick and glass buildings, and outdoor cafes line every road. There are hen and stag dos a-plenty, and hitting the main drag in Old Centre to party hard is definitely part of the experience, as is strolling through the infamous Red Light District where purring women push themselves up against windows, beckoning in paying customers. When you’re looking to chill out, visit the mesmerising Van Gogh Museum or kick back with a spliff. Yes, it’s legal here – and all part of the, er, cultural experience.

You can’t talk about Amsterdam without mentioning the weed cafes, or ‘coffee shops’, as they call them. Even if you’re not a smoker, have a peruse of the menus that read like restaurant offerings, and marvel at all the dozens of weird and wonderful flavours (you could also try some in a hash cake). Spui Square in the Old Centre has the highest concentration of coffee shops.

Lounging in the numerous green spaces is just a way of life here. If you’re looking to exert yourself (and we mean this in the loosest sense of the word) then go for a bike ride through the ambling passageways that lead through old markets. There are numerous rental places as cycling is the main mode of transport here, but be mindful of the trams. You should also head for the district of Jordaan. It’s completely charming, crammed with mysterious bric-a-brac stalls, and top-notch galleries.

Alternatively, a brilliantly booze-fuelled way to see the city is by signing up for a ‘Beer Bike’ tour with Damtours, where you pedal around the city while sat at a mobile bar drinking beer. Genius, no?

In the Museum Quarter, you’ll find the Van Gogh Museum, as well as Rijksmuseum, which houses works by Dutch masters Vermeer and Rembrandt. The Anne Frank museum, which has preserved the actual space where she and her family hid and were eventually discovered during World War Two, is a dramatic and moving testament to her and many others’ bravery.

There are also some quirky museums, such as the Tattoo Museum, and a dedicated hemp and sex museum (what else?). Mind the bright pink plastic phallus on the way out.

Amsterdam is packed full of bars and restaurants, with everything from a mini Chinatown to entire rows of Argentine eateries. They’re buzzing at all hours, as lads on tour soak up their hangovers – or line their stomach in preparation for the next. Also, Amsterdam is a snack-lover’s paradise thanks to the ‘munchies’ everyone inevitably gets.

On every corner you can get your mitts on greasy pizza, chocolate-smothered waffles or traditional fried balls of beef and breadcrumbs, called bitterballen. Outdoor stand Vleminckx on Vooetboogstraat offers what may be the best chips you’ve ever had, and we recommend going native by eating them with mayo. At Burger Bar, good-quality patties are loaded high with delicious sauces and toppings that will have you coming back for more.

If you want something more classy, head out of town by taxi to REM Eiland. Don’t panic when they drop you off in the middle of an industrial wasteland, they have the right spot. Housed in an old oil rig with sky-high 360-degree views of the water, the restaurant serves up modern European fare and good wine. The prices won’t break the bank, but dress up a bit for the occasion. Arriving here means that you’re in the know. 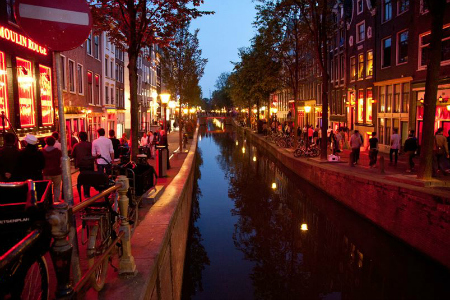 Where not to party is the question. There are 1,200 bars in Amsterdam, so you’ll never have problems finding some froth.

Dam Square and the Red Light District in the Old Centre is where it all begins, and you can’t walk more than a step without stumbling into a watering hole, whether you like it or not. Simply follow the good vibes rather than a shopping list of bars. For a relaxed experience, head to Caféde Dokter, which is one of the smallest and oldest bars in Amsterdam.

Twenty Third Bar in the arty neighbourhood of Pjip is a classy affair, worth a visit for its spectacular view of the city from the (you guessed it) 23rd floor. Cutting-edge house and electric music permeates the clubs here. Club Trouw, located in an old newspaper printing press, is a cavernous, multi-floored venue where the beats go on all night, and well in to the day. Bitterzoet offers a break from non-stop techno with its soulful vibes and intimate bar.

Hostels abound in the Old Centre and they’re all buzzing. Especially recommended is St Christopher’s at the Winston, which is bang in the middle of the action.

The big hostel has kinky wall art by local artists and a good-time vibe in the bar, with three drinks for the price of two every night. They also have a 24-hour desk and lockers, which is useful if you’re travelling with a group and have some early arrivals.

The Flying Pig hostels, with two city locations, are also vibrant places to stay, and they have the added bonus of a kitchen for guests. Rooms aren’t that cheap in Amsterdam, and if you want a private room expect to pay upwards of £30 a night.

More upmarket is the chic Citizen M, with locations near the airport, and also in the centre of town. This trendy boutique hotel chain has designer lounges, funky furniture and blue-lit walk in showers in every room. Prices start at £68. 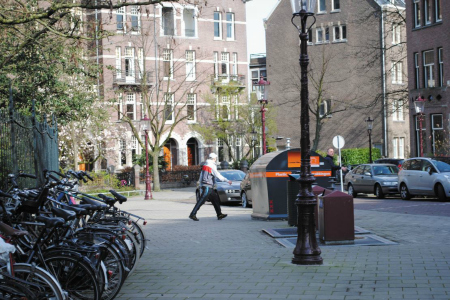 If the city all becomes a bit much, there are some relaxing and interesting day trips to be had beyond the trams and coffee shops. Let’s start with windmills; they are the cultural icon of Holland after all. In the Unesco World Heritage Site of Kinderdijk, which is about an hour outside of Amsterdam, you’ll find 19 of these beauties in a row, and you can enjoy views from the riverbanks with a picnic or take a canal tour.

Zandvoort, which is a 30-minute train ride out of Amsterdam, is Holland’s version of Brighton. This seaside resort town is packed full of lively open-air bars, and the long stretches of coastline mean there’s plenty to explore. Trains run until 4am. Go to ns.nl for tickets.