Everything but the Pig’s Squeal

Six of us had been invited along as part of the promotion drive for the DVD release of the 6th season of The Walking Dead. 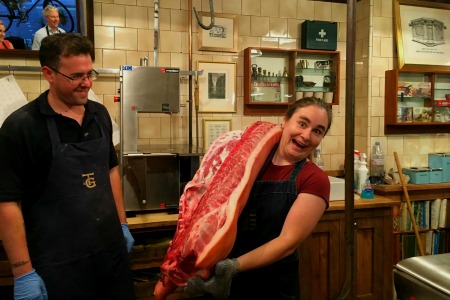 After we’d all taken a turn to pose for pictures with a 40kg side of pork – I went for the over the shoulder scenario – we were taken over to the prep table. Andre went through each part of the pig, during which I was genuinely thrilled to learn that in certain parts of Spain the ears are boiled or fried and served as tapas. It’s part of a culture known as ‘Del cerdo, se come hasta los andares’ – everything but the pig’s squeal. Brilliant concept but on this occasion we were invited to slice and splice some more refined cuts.

Fist sheathed in a chain mail glove we were each given a sharp knife and a gloriously plump mid section of pork. The idea was to transform it into a roasting joint and ribs. With the help of a monster cleaver I managed to do a half decent hack job of taking the ribs off. But a more delicate task now awaited. Quicker than a boy scout desperate to get his knot badge, Andre expertly tied his joint of meat with string, entreating us to do the same. After 15 minutes of frustration bordering on despair I finally managed a few limp loops.

For carnivores, it’s a great way to spend an evening, although I can’t comment on the finished product, as unlike the standard T&G classes, we didn’t take the meat home with us. I just hope whoever did eat my lovingly butchered creation got as much enjoyment from the digestion as I did from the dissection.

The Walking Dead: The Complete Sixth Season is available on Blu-ray™ and DVD from 26th September 2016, courtesy of Entertainment One

Class of the week: Alter-G Treadmill