These low lying clouds are shown, in these stunning photographs taken by helicopter pilot JR Hott as he flew above the Gulf of Mexico, moving in across the coastline and funnelling up over the tops of the beach-positioned buildings.

Hott didn’t have long though to take these eye-catching snaps, as he has explained: “We jumped into the helicopter and took off. Within a few minutes after we landed, it [the fog] covered up the helipad.” 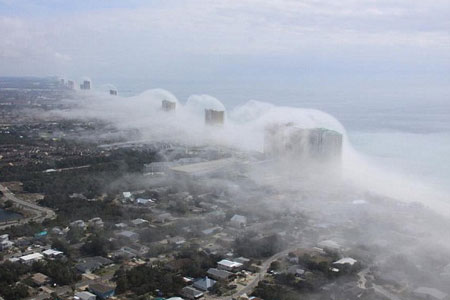 Hott posted the amazing photos on Facebook and they have since become an internet-phenomenon. “It’s amazing to me how this thing has gone nuts,” he said to KATU news agency.

The cloud is the result of warm, moist air forming just over the coastline, which give rise to these particular low-lying formations.

The Fall of Rome Imperial Ball III, The Beauberry House

Killing time in the airport: luxury versus loathing