Hence the internet’s collective “Aww” when Carmel High School senior Chelsea Blaney posted a yearbook photo of the couple voted cutest by the graduating class of 2013.

“Two of my best friends won Cutest Couple of our senior class,” she wrote on her Tumblr page.

“First time in my school history a same sex couple has even been able to run for this category, not to mention winning it. So proud of them, and my school.” 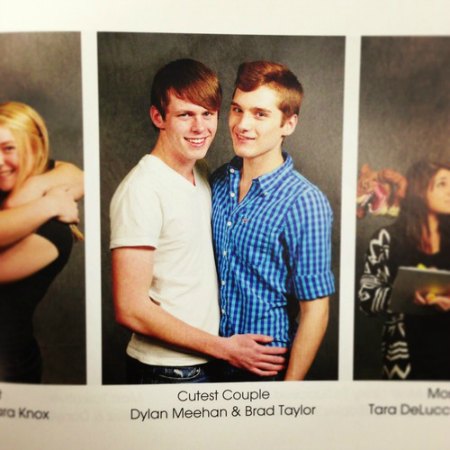 Within three days her post had 100,000 notes and made the rounds on dozens of websites reports Gawker.com.

“This whole thing has been a bit surreal for us because we have been raised to believe that love is love,” Dylan and Brad told The Huffington Post.

“We never realized that our happiness and openness would inspire so many individuals.

“The support we have received from our family, friends, and even strangers has led us to believe that our affection for each other is normal.”

Future of The Simpsons in jeopardy over pay row + VIDEO

Survivor Vanuatu: How hard is it, really, to survive a tropical island full of tourist resorts?

Ask the Bogans: I earn loads, but I hate my boss