Channel Seven dropped the popular show from its variety-packed schedule and it was soon snapped up by rivals Nine, who then tried to poach Seven talent Brown, who’s appeared on The X Factor and Dancing With The Stars.

But Seven were having none of that after released her from her contract to return to LA with her family and won a legal battle to stop her jumping ship.

Every problem has a solution though, and when you lose one Spice Girl there’s every chance there’s another one lining up to step in.

Halliwell is already on the publicity trail, appearing on A Current Affair, which just so happens to also be on Channel Nine. 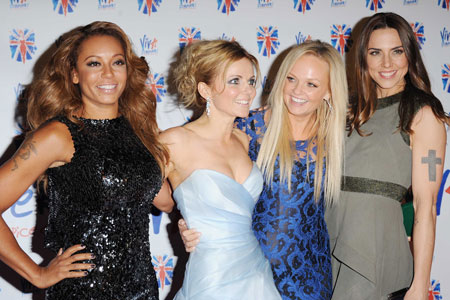 The 40-year-old said she got the OK from her zigga zig ah mate before signing on to join Brit comedy legend Dawn French and Aussie shock jock Kyle Sandilands on the panel.

“She actually said I just want you to know I think you should do it cause you’re gonna have a great time and I love Australia,” Halliwell said.

Unsurprisingly, she’s admitted she’s a fan of the show she just signed up to work on.

“I actually genuinely love the show, you know. I watch Britain’s Got Talent and I’m a fan of the show. I think shows like that are brilliant and I love the opportunity they give to normal, everyday people.”

Halliwell hit the headlines over the weekend after an impromptu pub singing performance after being dared by fellow Spice Girl, Mel B. See the video below.

Geri Halliwell is the fourth judge on Australia’s Got Talent replacing Mel B. That’s like upgrading from Tiger to Qantas.