Her campaign soon took hold of the public’s imagination – the snap was shared 30,000 times, and received huge amounts of media attention.

Happily, the story caught the eye of Katheryn’s birth mother – she came forward, and the two women have since met.

According to the Daily Mail, Katheryn and her mother greatly enjoyed their first meeting – and when asked if she had forgiven her mother, Katheryn said ‘110%’.

‘I got the hug that I had wanted for the last 27 years, and that broke the ice,’ she said. ‘I asked if I could have it, and she said, “absolutely,” and just held her arms open, and the rest is history.’

Katheryn’s mother, who cannot be named, was raped on holiday and became pregnant. She hid her condition from her family, and gave birth at home before taking her newborn daughter to the Burger King. 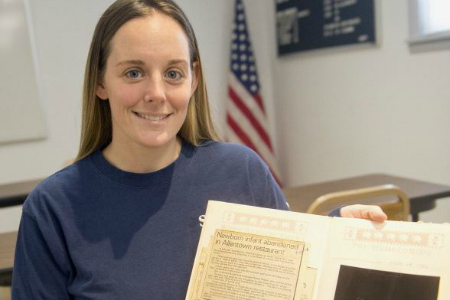 ‘She left me somewhere she knew I’d be found,’ Katheryn added. ‘She did not want to throw me away.’

Katheryn, who is a married mother of three, was fully supported by her adoptive mother, Brenda Hollis.

‘I think it’s just kind of fun. There’s so many questions to be asked, and I am so excited about it,’ she told WFMZ-TV 69 News.

Mother and daughter exchanged contact details during their meeting and plan to meet again.