There’s a gazillion reasons why the Gold Coast should be on your radar. The Goldie, as it’s affectionately known, is kind of like an adult’s Disneyland where you’ll find thrills on every corner, colourful characters and a hedonistic atmosphere from dusk to dawn. Whether it’s theme parks or nightclubs, there’s action to suit all needs.

Some people like to refer to the Gold Coast as the Miami of Australia, because the city, just north of the New South Wales border, enjoys a subtropical climate all year round, perfect for getting that beach body out. You’ll see plenty of flesh on display in Surfers Paradise, aka the heart of the Goldie (but rather misleadingly, not the greatest spot in the area for surfing). You’ll also find shopping, nightclubs and dining on the Esplanade by the beach. If rollerblading was still cool, you’d see that here too. You get the picture.

If you really need to get away from all of this (perhaps this is your liver talking), you can escape to the hinterland for some recuperation in the fresh mountain air. 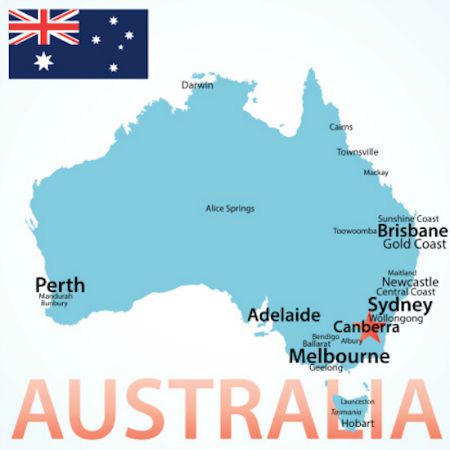 Surfs up
The Gold Coast is home to some of the most consistent waves in the country, with more than 70km of coastline. While the true surfers won’t get an epic ride at Surfers Paradise beach, it is great for learning. Start off with a two-hour lesson and see if you catch the surfing bug.

For the more advanced wave rider, launch yourself into the ocean at Burleigh Heads, a classic right-hander and the home to many a surfing competition. Likewise with Kirra, you can be sharing the waves with some of the world’s best surfers, many who got their start in these very waters. The legendary ‘Superbank’ breaks here at Snapper Rocks and is one of the longest rideable waves in the world. Possibly one of the most crowded too. For a more peaceful surf, go south to Coolangatta, a small, relaxed surf town where you can also go diving (Kirra and Cook Island) or watch humpback whales along the jagged coastline.

Adrenaline fix
Adrenalin junkies will want to make a beeline for one of the famous theme parks. You have several to choose from including the quintessential theme park, Dreamworld (dreamworld.com.au), where you can test your nerve on the country’s most hair-raising rides, or Wet ‘n’ Wild (wetnwild.com.au) where you are in for some thrilling water slides, wave pools and dive-in movie nights.

Prefer DIY thrills? Why not strap yourself inside a big bouncy ball and roll down a hill in the phenomena known as zorbing? Invented by the slightly unhinged Kiwis, it’s a must-do on your Gold Coast thrill-seeking itinerary (you can do it in Pimpana). The three metre PVC ball has an opening on one side, big enough for a person to squeeze through and be harnessed up. You’re then launched down the hill, spinning upside down and out of control. Don’t be hungover for this one.

If you’ve got the cash to splash (and you can stay away from the casino) lay it down on a Tiger Moth flight (tigermothjoyrides.com.au). The 1930s-style red-and-silver Tiger Moth plane is iconic to the Gold Coast – it’s even featured in Tourism Australia commercials. It’s part of the Gold Coast mise-en-place as much as chiselled surfers and drunk teenagers. You’ll often see the vintage plane in the sky performing acrobatics and, if you can keep your food down, it’s the best way to see the city, the ocean and the hinterland all in one viewing – and from many a different angle. Take a 35-minute ‘Extreme Aerobatic’ flight and feel those G-forces in action.

If you want to see the city from up high, but prefer not to battle with keeping your lunch down, the Q1 building (q1.com.au) is for you. It looks like a gun with a bayonet piercing the sky, but in actual fact it was inspired by the Sydney 2000 Olympic torch. It’s the tallest residential building in the country and, if you can afford it, you can also rent a holiday apartment here too. But for most of us, a trip to Skypoint at the top of the building via the super fast elevator (77 floors in 43 seconds) is as good as it gets. Since you’re here, treat yourself to the Skypoint Climb, an exhilarating outdoor climb 270m above sea level where you can see it all as you’re  strapped onto the railing and dangled about. Up here you’ll feel like you’re vis à vis with the Tiger Moth planes. 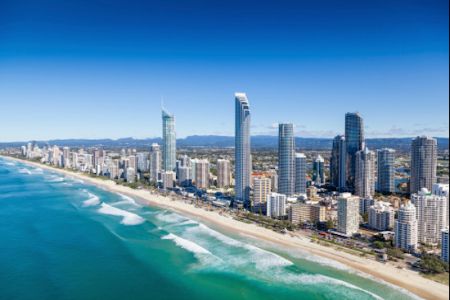 Animal lovers should make tracks for Currumbin Wildlife Sanctuary (cws.org.au), just south of the Goldie, where you can get up close and personal with crocodiles, wallabies, kangaroos and koalas. You can even give a koala a cuddle – something you can’t do in other states.

There’s also the thinking man’s theme park, Thunderbird Park (thunderbirdpark.com), situated in the heart of Mount Tambourine, part of a mountain range that towers over the Gold Coast. The concept began in Europe when an ex-military man decided to use his commando training to create a challenging ropes course – in fact it’s the largest in the country. You can spend hours here manoeuvring your body through
the extensive course, and you can’t cheat – we tried – you must make it to the end by completing every flying fox, every tunnel, every Tarzan swing and every suspended bridge.

Speaking of, these are the hills you should be running for if the going gets too tough. The Hinterland is only an hour away where Tamborine National Park awaits with hiking, mountain- biking and the odd distillery. Often referred to as the ‘green behind the gold’ it’s made up of the Gold Coast Hinterland, the Scenic Rim, Tamborine Mountain and the beautifully green Lamington National Park. Up here you’ll feel miles away from the madness of the Gold Coast.

Down south in the quieter parts of Coolangatta (Cooly), stay at the Coolangatta Sands Backpacker Hostel (coolangattasandsbackpackers.com.au) where you’ll be minutes from the beach and get free surfboard hire too. There’s also a bar downstairs, but it’s not the party-central that Surfers is known for. It’s the kind
of place where you’re more likely to hear the strum of a guitar on the verandah as you sink a few cold beers. Meanwhile in downtown Surfers you can stay at the quirky but cute QT Hotel (qtgoldcoast.com.au) where the staff look like they belong in a Beach Boys music video and the rooms are chock full of hidden treasures. 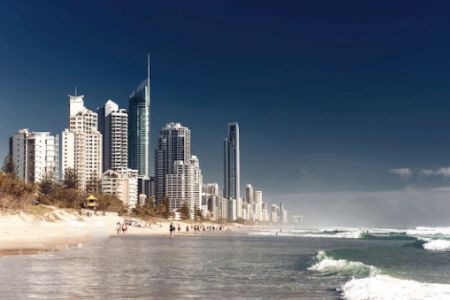 WHERE TO STAY
Islander Backpackers Resort (islander.com.au/ backpackers), near Cavill Avenue, puts other hostels to shame. With an outdoor swimming pool, spa, tennis courts and steam rooms, you will be boasting about this one on the road for months to come. Sleeping Inn backpackers (sleepinginn.com.au) is also a reputable place to rest your weary head in Surfers. You stay in serviced apartments so you can save a few coins by cooking, or at least microwaving packets of two-minute noodles.
Down south in the quieter parts of Coolangatta (Cooly), stay at the Coolangatta Sands Backpacker Hostel(coolangattasandsbackpackers.com.au) where you’ll be minutes from the beach and get free surfboard hire too. There’s also a bar downstairs, but it’s not the party-central that Surfers is known for. It’s the kind of place where you’re more likely to hear the strum of a guitar on the verandah as you sink a few beers. Meanwhile in downtown Surfers you can stay at the quirky but cute QT Hotel (qtgoldcoast.com.au) where the staff look like they belong in a Beach Boys music video and the rooms are chock full of hidden treasures.

WHERE TO EAT AND DRINK
Enjoy a cocktail at Hurricanes (surfers.hurricanesgrill.com.au), a steakhouse and bar with sweeping views of the beach, or for something a little more low-key, go for a cheap schooner at the Northcliffe Surf Life Saving Club (bmdnorthcliffe.com.au), also with views of the beach. You can get more of a retro Miami-kitsch vibe – without the sand on the floor – at Stingray, located in the QT Hotel (qtgoldcoast.com.au).
Cavill Avenue is probably where you will end up if you want to go clubbing, one of the Gold Coast’s main attractions. Here you’ll find a strip of clubs, bars and clubs of the naked-women variety. Things have evolved over the years and now you’ll find it’s not as tacky as it once was, with the streets cleaning up and lots of surf art and live music from talented buskers. Down the arcades and streets nearby you can stumble upon delicious and cheap Asian food, surfboard shops, tattoo parlours, and secret nightclub doors.
If you really want to be a tourist (come on, there’s no shame in it here) dance the night away at Cocktails and Dreams (cocktailsnightclub.com.au). Based on the Tom Cruise movie from the 80s, it’s one of the largest nightclubs in Surfers Paradise. Or if you aren’t good at making decisions, join a Wicked Club Crawl (wickedclubcrawl.com.au), where the tour guides will have you weaving in and out of some of the hottest bars in town all night, downing shots and playing drinking games; you won’t need to use a single brain cell.
Lastly if you fancy a flutter, head to Jupiters (jupitersgoldcoast.com.au). Located on Broadbeach Island, you can easily get lost among the roulette wheels, buffets, fine-dining restaurants and entertainment of this colossal casino. Consider yourself warned! 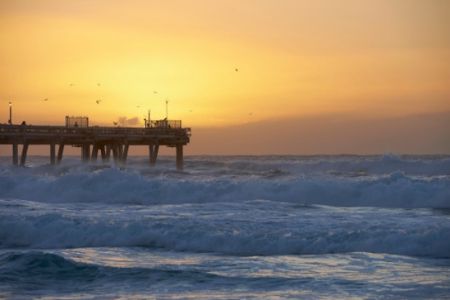 London gig: The Parov Stelar Band play The Forum on May 31 and June 1