Heidi the cross-eyed opossum has died, aged three and a half, devastating thousands of fans across the globe. Eclipsing any other news today – bar the Michael Jackson death photo – thousands have taken to Twitter and  Facebook to share their overwhelming emotion.

Choked up? Leave a message on Heidi's Facebook tribute page

Another wrote: “God bless you, Heidi. Rest in peace. You brought joy to so many people…you will be missed.”

The Leipzig Zoo in Germany said that its resident, Heidi the cross-eyed opossum, had been unable to move for several weeks and was crippled by arthritis. Finally the decision was made to put her to sleep.

“The cross-eyed opossum Heidi has closed her eyes for ever,” zoo director Joerg Junhold said in a statement.

“We carried out every possible test and treatment. We made the final decision to relieve the animal from suffering and pain.” 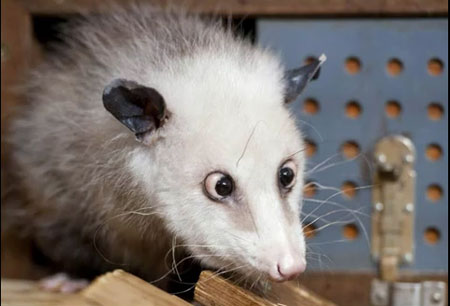 Heidi’s famous cross eyes were the result of a poor diet or possibly due to fat deposits behind her eyes caused by a weight problem.

She was originally kept as a pet before being abandoned in the US. The opossum eventually found herself in Germany’s Leipzig Zoo, which can take credit for turning the rodent into a star.

A clip from a TV show featuring a bewildered looking Heidi in her nocturnal enclosure instantly went viral, catapulting the animal to global super-stardom.

Heidi the cross-eyed opossum’s celebrity status was cemented when she appeared in a US TV show during the Oscars in February – her wonky expression belied a streak of psychic genius and Heidi correctly chose both the award’s best actress and best actor.

The visually-challenged creature will, however, live on. A Heidi Facebook tribute page has more than 330,000 fans and counting.