Jackson died of an overdose of propofol, a powerful anesthetic that should not have been administered outside of a hospital. His doctor, Conrad Murray, admitted to giving Jackson the drug on a nightly basis for two months, to combat the singer’s insomnia.

Murray’s lawyers claimed in court that Jackson caused his own death by administering the fatal dose to himself by injection. It is said that Jackson fondly called the anesthetic drug ‘milk.’ 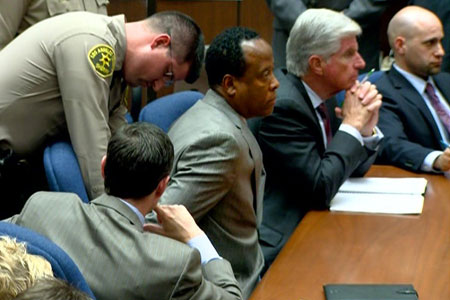 At the time of his death, Jackson was almost medically blind, basically bald, and was dependent on drugs to fall asleep.

The singer would reportedly take hours to urinate, suffered from arthritis as well as a severe toenail fungus that his doctor feared would rot flesh.

After his death, Jackson was found in bed wearing pyjamas, a surgical cap on his head, and a condom catheter commonly used on comatose hospital patients.

He lay next to a child size doll and a jug of urine.

His closet was fund to contain two bags of cannabis leaves, and prescription medicines were found throughout his house.

The singer’s bedroom contained handfuls of vials, and empty bottles of sedatives and anti-anxiety pills. His doctor, Murray, ordered four gallons of the drug propofol (the drug that killed Jackson), despite the fact that a few drops of the drug can put a man under.

The prosecution branded Murray’s use of propofol an ‘obscene experiment.’

During the trial, the public learned that during his life Jackson had a strange obsession with aftershave and skin-whitening creams. The singer also possessed an extra rib.

Fifteen members of Jackson’s family were present at the court case, and endured details about the oddities of the final moments of their brother, son, father and friend that were shared publicly with the world.

Sister La Toya Jackson repeated the sentiment: ‘Thank you America… Michael was looking over us.’

The singer’s 81-year-old mother, also present at court, told reporters ‘I feel better now’ as she left the scene. 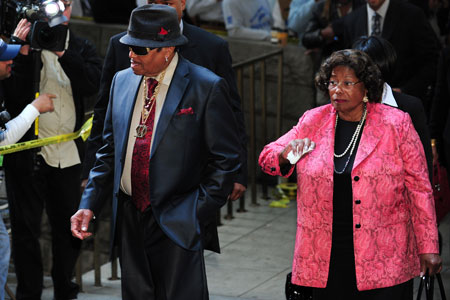 Jackson’s doctor Murray was led away in handcuffs as his girlfriend and mother of one of his seven children told him ‘I love you.’

Murray, 58, faces up to four years in jail and was denied bail. He is likely to lose his medical license.