There’s youth and vigour in old Hugh Hefner yet, as he demonstrates with these ‘planking’ photos.

Determined to show his new girlfriend. Anna Sophia Berglund, he’s still got some tricks up his sleeve, the Playboy mogul was captured in black silk pyjamas, lying face down on a table in his famous Playboy Mansion in the Holmby Hills, Los Angeles. 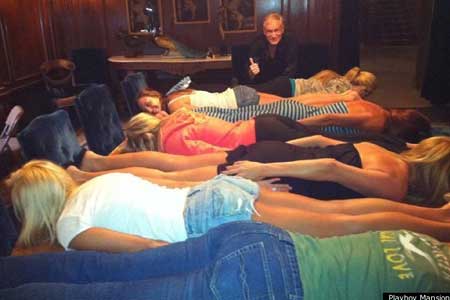 Dirty plates and glasses can be seen at the other end of the table.

The picture was posted on Twitter alongside another of his playboy girls having a go at the fad.

They are lined up alongside one another on the table, with the used plates having been cleared, and Hefner can be seen behind them pulling the thumbs up.

Hefner, 95, has had a rough trot lately, having been dumped by his former fiancée, Crystal Harris.

His new ‘number one’, Berglund  – who also happens to be Harris’ best friend – posted the picture on her Twitter account, saying “I got Hef to plank!”.

A host of celebrities, including Justin Bieber, Katy Perry and Rosario Dawson, have all joined the planking club, having engaged in the strangely fascinating fad of stiffed posing.