VSM Enterprises, the developers of the app, claim it’s to help men size themselves for a more tailored condom; according to sexual health charities, condom failure is often a result of a poor fit. 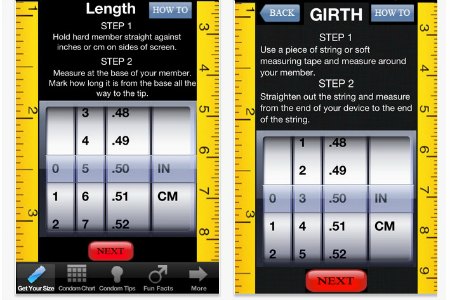 Still, we suspect most men just want to know how they measure up. The app also graphs where a user’s size falls on the world league table. Warning: this may result in depression, and a severe ego bashing.

The app also recommends nearby stores to find a condom that fits, and provides sexual fun facts and prophylactic tips. A bargain for 69p.

Men are instructed to “hold hard member straight against inches or cm on sides of screen,” and to use a piece of string to get an accurate measurement of girth.

The app is also available for Android phones.