Pictures of Kate Moss topless will appear in the new Pirelli Calendar, as the supermodel shows the world she’s still got it going on.

The Pirelli photographs were taken by Mario Sorrenti, Moss’s ex boyfriend, who first photographed the model when she appeared in a Calvin Klein campaign in the 1990s. 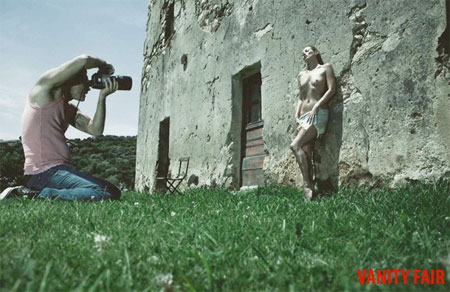 Kate Moss shot for the Pirelli calendar, as revealed by Vanity Fair

Perhaps wary of Moss being photographed naked by her ex, Jamie Hince tagged along for the week-long shoot. Perhaps not such a slog, considering Milla Jovovich and Dutch model Saskia de Brauw, also posed for the calendar.

The Pirelli calendar is out on December 6 but is not available to the public as it's only given to celebrities and VIP Pirelli customers. However the Kate Moss pictures were given to Vanity Fair as a sneak preview.

Tyre-manufacture company Pirelli produces a calendar annually, often featuring the work of top fashion photographers. In the past, Herb Ritz, Richard Avedon, Peter Lindbergh, Annie Leibovitz, and Patrick Demarchelier have all shot naked or semi-naked models for the publication.

Meanwhile, US Vogue has published pictures of Moss and long-time friend John Galliano on her wedding day.

In one shot, Galliano holds up Moss’s veil as she smiles back at him. 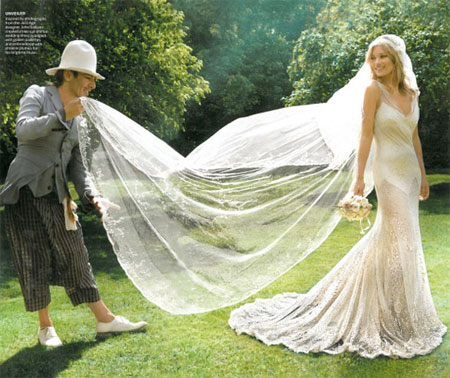 John Galliano and Kate Moss on her wedding day

Galliano, who was recently fired from Dior for a drunken, racist outburst, said that working on Moss’s wedding dress was his “creative rehab”.

“She dared me to be John Galliano again,” the designer told US Vogue. I couldn’t pick up a pencil. It’s been my creative rehab.”

NRL finals: Week one wrap as Rabbitohs and Panthers win a rest

in Brazil, model Nana Gouvêa has become the latest target of photoshop satire memery after photos of her posing next to fallen trees in the disaster-stricken streets of New York City (shown, top row) came off as rather distasteful to many Brazilians on Fa