Rumours in the media and online had been circling for some time.

Users on Twitter even suggested that a superinjunction had been issued to prevent the story becoming public.

Foreign magazines had gone so far as to claim that Beckham had left his wife.

However Katherine’s tweets poured cold water on the rumours. 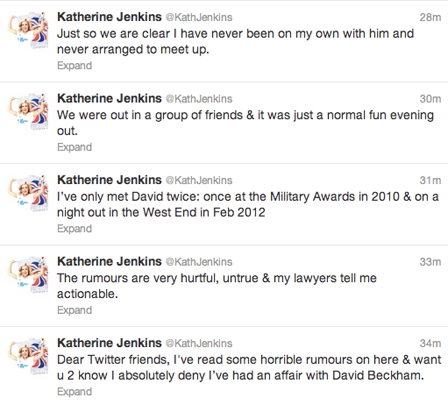 Jenkin’s profile has been on the up stateside after she came second in Dancing With The Stars.

Some Twitter users claimed that Jenkins was attempting to draw attention to herself, suggesting that they hadn’t heard the rumours.

Lily Allen appeared to mock the Soprano denying that she’d had an affair with Jay-Z.

I’m really upset at the hurtful rumours going tound about me having an affair with Jay Z. My lawyers tell me they are actionable.

Going Down in Coober Pedy