Katy Perry’s ET video, featuring Kanye West has Lady Gaga fans up in arms with cries that the alien-themed video is a Born This Way rip off.

The ET video is certainly a departure for Perry and features dramatic makeup, trippy effects and some pretty impressive cinematography.

Where the “copying Gaga” claims come in is that both ET and Born This Way see their star being born in space and emerging as some type of alien being.

The singer also seems to have some sort of psychic connection with a deer and, after she falls back to earth, Perry sprouts some deer legs as she walks off into the sunset with her bare-bummed fella. 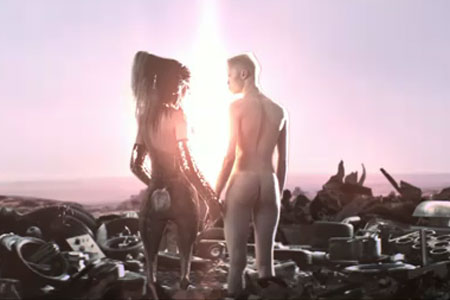 Perry has explained her change of pace with ET, saying it was inspired by Tennessee rap group Three 6 Mafia.

“I remember writing with Max Martin and Dr. Luke, and there’s this producer they wrote with, named Ammo as well, and they were just showing me different samples of songs or tracks or beats, and they accidentally pulled up this beat, and it was for Three 6 Mafia,” Perry told MTV News.

“I heard it and I always knew I wanted to write this futuristic, alienistic song, and they pulled it up and I was like, ‘Wait, I can wrap my head around this. I know this seems like a long shot, but I think I have the perfect material to put on top of this sound’.”

However some viewers remain unconvinced that Perry didn’t just pinch the idea from Lady Gaga. Debate has been raging on Twitter.

JessShuu said: “Katy Perry’s music video for ET is too Lady Gaga for my taste. Only Lady Gaga can pull off Lady Gaga.”

However, others have defended Perry’s alien video.

Perry herself had this to say:

Once upon a beach…