Ibrahim Langoo reportedly found the mystery organ when he visited the local fast food joint with a friend and started to tuck into his Gladiator box meal.

“I have a habit of picking the chicken off the bone with my fingers and as I pulled the second piece apart, I saw this horrible wrinkled foreign body.” he told The Sun.

“I threw it down onto my tray immediately. It looked like a brain. I suddenly felt grim and really sick.” 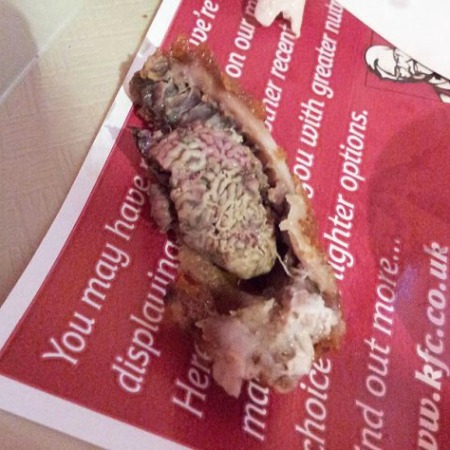 The shocked Colchester student tried to inform staff at the KFC but was ignored, as it was around 1pm during a busy lunch time. He took a photo on his phone, which has now gone viral on the internet.

KFC responded by explaining that the mystery organ was not a chicken’s brain – it was in fact a kidney.

“Although we haven’t received the product, it appears from a photograph that unfortunately on this occasion a kidney, and not a brain as claimed, was not removed in the preparation process.”

“We’re very sorry about Mr Langoo’s experience and while there was no health risk, we agree it was unsightly.”

Langoo has been offered vouchers to compensate, should he wish to return for another meal.

PETA’s ‘Kentucky Fried Cruelty‘ campaign has criticised the worldwide restaurant chain for its treatment of chickens.