Most of Lady Gaga’s awards were for her Bad Romance video. Watch it here if you’ve forgotten what the fuss is all about.

“I was so nervous for tonight that I would let my fans down,” Gaga told the crowd as she accepted her final award for video of the year.

In true Gaga style, the singer wore a different outfit to receive each of her awards.

Gaga picked up one award in a meat dress that appeared to be made of slices of raw beef. 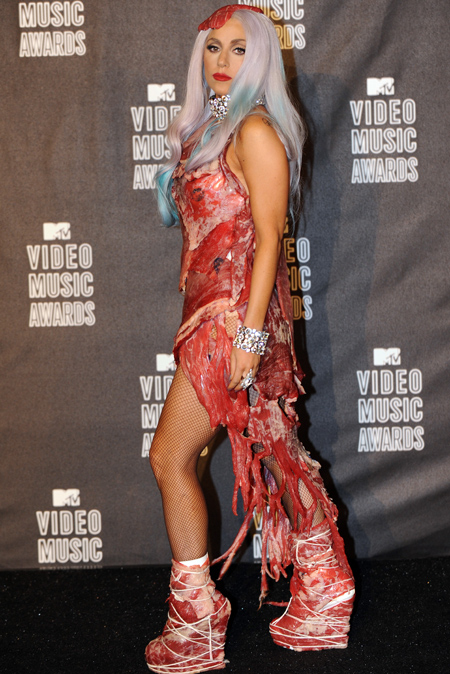 And another in a pair of Alexander McQueen’s famous animal heels. 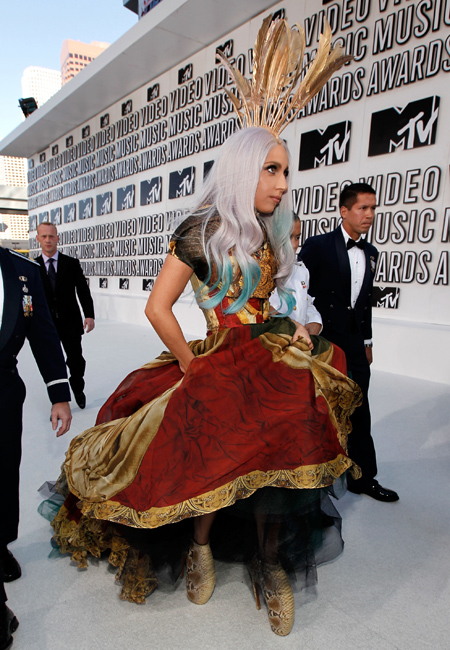 Cher presented Lady Gaga with her final award, for Video Of The Year and as a thank you to her ‘Little Monsters’, Gaga revealed the name of her new album – Born This Way.

Performing part of a new song acapella, Gaga sang: “How beautiful in my way cuz God makes no mistakes. I’m on the right track. Baby, I was born this way.”

Gaga had demanded asked that the red carpet outside LA’s Nokia Theatre was replaced by a white one – as part of her Like a Virgin theme, in honour of Madonna. A source told The Mirror: “Her dressing room was stocked with white tea sets, Smile Studio teeth whitening, white flowers, white sofas… Everything was ice white.”

Lagging behind Lady Gaga were Eminem and Jay-Z who won two gongs each, whilst Justin Bieber walked off with the award for Best New Artist.

Gaga’s eight VMA gongs puts her on a par with a-ha, who won the same number of awards in the1986 VMAs. Only British rocker Peter Gabriel holds more, as he won nine VMAs in 1987. But he didn’t wear a meat dress.

Best Art Direction: Florence and the Machine – “Dog Days Are Over”

A place to impress: The Gaslight Grill in Battersea, London restaurant review

How to get a working or holidaying visa for Australia: Tips and advice