If you want to learn to sail there can be few places more beautiful to do it than Australia’s Whitsunday Islands. TNT’s Carol Driver got on board…

My ferry ride to Hamilton Island is choppy, to say the least. The vessel is plunging up and down over the waves while the sky above looks heavy with cloud.

I, like everyone else travelling from Airlie Beach’s Shute Harbour, cling on to my seat and look at the horizon – apparently a cure for seasickness. It doesn’t work. My stomach is doing flip-flops and I’m hoping that we’re nearly there, which, thankfully, we are.

It doesn’t bode well. I’m on my way to  learn how to sail around Australia’s Whitsundays – 74 islands in the heart of the Great Barrier Reef.

Despite the recent floods which have affected Queensland and New South Wales, the tourist board is keen to assure travellers that Australia, including the Whitsundays, is open for business.

I meet the rest of my crew – couple Nonie and Graham, and Mike – and our skipper Tony at the harbour and we head to Falcon – home for the next five nights.

It’s a Beneteau 423 – 42ft long with three cabins, meaning I have my own sleeping quarters – a tiny room with a small toilet/shower. We also have a kitchen/dining area which doubles up as Mike’s bedroom.
It’s going to be an intimate, and interesting, few days.

Day one
We spend the whole morning learning what checks we need to carry out each day – WOBBLE (water, oil, bilges, battery, leaks, electrics) – as well as safety procedures such as what to do if there’s a fire, how to use the emergency radio and what mayday signals to use.

We’re then ready to go, so it’s all-hands-on-deck. Having never sailed before, it looks quite complicated, with ropes and levers everywhere. But with his 39 years’ experience, including world championships and Olympic trials, I’m sure we’re in safe hands with Tony.

Once we’re out of the Hamilton Bay marina, we hoist the main and head sails – and we’re sailing! We each take it in turns at the helm.

I’m just about to lull myself into a false sense of security when Tony throws the life belt into the sea. Mike yells, “Man overboard” and acts as a spotter, pointing at “Bob” as we decide to refer to “him”, so that we don’t lose sight of him. It’s lucky it’s not a real emergency as it takes me quite a while to turn the yacht around and to work out which side of the boat we need to pick Bob up from.

Four hours – and three more Bob incidents – later we arrive at our home for the evening at May’s Bay. The 8NM journey – S/SE of Hamilton – has taken us four hours, so it’s been at a leisurely pace. After a few sundowners as dusk falls, I cook spag bol for the team. We’re asleep by 9pm – it’s been a tiring day. 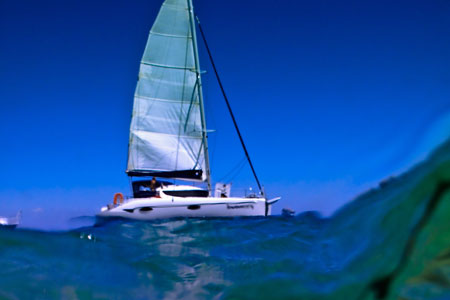 Day two
Up at 6.30am for breakfast and to plan where we’re going to be heading.

I’m naviguesser so it’s up to me to warn the helmsman of any dangers such as low tide/coral/rocks en route and also to work out the best direction for our destination. We set off and Nonie and Mike volunteer to make the tea. Two minutes later, Tony’s given me the nod to throw Bob overboard.

Quick to react, Graham, who’s at the helm, shouts, “Man overboard”, before twisting the wheel. We hear crashing from the deck below as a bedraggled Nonie and Mike emerge looking unimpressed.

Tony bursts into laughter as we faff around trying to rescue a “passenger” who is increasingly becoming a liability.

Later, we learn about gybing (turning with the wind) and tacking (against the wind) while sailing to Nara Inlet where we excitedly spot a humpback whale.

We anchor at Stone Haven, perfect for snorkelling, and watch manta rays glide through the sea as play Scrabble and drink beer as the sun sets.

Day three
It’s my turn to take control of the wheel. I’m strangely confident even though I’ve been at sea for just three days.

We cruise along, the sun beaming and the sound of the waves lapping at the sides of the boat.

Everything is calm, so I decide to head to the kitchen for a drink and a bite to eat. I hand the wheel to Nonie and make my way downstairs. Five minutes later, I walk back up – immediately realising something is different.

The horizon has changed – and we’re going in the opposite direction. I point this out to Tony as the rest of the crew bursts into laughter. Another one of his practical jokes. I’d forgotten to give Nonie directions when I gave her the controls. Hilarious!

Pride slightly wounded, I take back the wheel and we sail to White Haven Beach – a 7km stretch of paradise along Whitsunday Island.

It’s exactly how it looks in the postcards. The water is unbelievably turquoise while the sand is so white, it looks as though it’s been bleached. There’s nowhere for travellers to stay and access is controlled to make sure its condition remains immaculate.

We splash around the warm water which is home to schools of colourful fish zipping about in the sun. It truly is stunning. Then it’s back to the yacht to sail to Hill Inlet and anchor at Tongue Bay.

Day four
I’m woken super-early by Tony loudly informing the crew that because we’re rubbish at conserving water, we’re going to have to head back to Hamilton Island to replenish our supplies. We’ve done well in terms of the food provided for the trip, but it seems a shower a day for four of us (Tony admits to not washing while onboard) has cleaned us out.

As it’s an (mild) emergency, Tony takes the wheel and expertly glides us back to Hamilton Island. We have a near-miss with a racing yacht at which our skipper shouts a couple of choice words.

It’s the perfect opportunity to have a proper shower and buy some provisions (wine) before sailing into the afternoon sun. Tony takes us on a mystery route where we’re on the only boat for miles.

We moor near a stretch of mainland Tony’s never visited before. It’s like a desert island – with hundreds of manta rays in the water and footprints of what we guess is a dingo. It’s eerie but beautiful – almost as though we’ve found a piece of untouched Australia.

Nonie takes the wheel for the afternoon while the rest of us soak up the sun. It’s been a stunning few days – an experience I didn’t think I’d enjoy when on the ferry to Hamilton Island.

My eyes are heavy as I hear Tony yell: “Man overboard!” My final thought before I drift off to sleep is that I hope it’s only Bob. 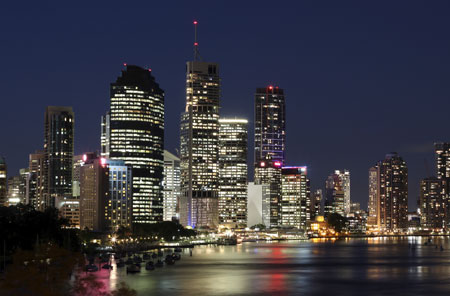 If you’re flying to Hamilton Island via Brisbane, make sure you spend a few days checking out this amazing city.

Located on the Sunshine and Gold coasts, it’s a fascinating mix of old and new. Book a bike trip through the City Botanic Gardens and then ride around the centre, discovering the sandstone castles and Queenslanders – classic houses on stilts.

To quench those cultural cravings, visit the Queensland Cultural Centre on the South Bank – the largest modern art gallery in Australia, which boasts the new Gallery of Modern Art and opens on to the Brisbane River.
To really get the heart pumping, abseil down Kangaroo Point in the centre of the city’s business district.

The 20m cliff adventure is suitable for beginners and you will enjoy fantastic views and a thrilling ride. However, it’s beaches that are Brisbane’s speciality, and there are 20 on which you can sunbath, cycle or dine. From here you can also book a ultimate diving experience on board a liveaboard at the esteemed Lady Musgrave Island – a four-hour journey from the city – where you can explore one of the seven natural wonders of the world – The Great Barrier Reef.