The Meares Pendleton showdown was one Olympics fans had been hoping for: the Australian and British athlete, both top of the cycling game, both fiercely competitive, are longstanding adversaries.

After Meares and Pendleton both cruised through the semi-finals the odds were that they would sprint against each other today. When Pendleton beat Germany’s Kristina Vogel and Meares finished ahead of China’s Guo Shuang, the electric final was set.

Both Meares and Pendleton claimed before the London 2012 Olympics that they were in fighting form. 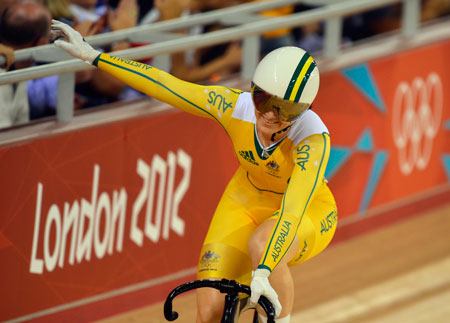 Anna Meares on her victory lap of the Velodrome. That’s Australian GOLD she’s wearing you know!

Pendleton, however, will have given the Australian athlete some sleepless nights since the pair began their Olympic challenge.

Meares was already feeling the heat after losing the sprint world title to Pendleton in Melbourne three months ago. Her angst was heightened when Pendleton took the keirin gold last week.

However Meares was never going to be an easy adversary for the Team GB poster girl. The Aussie cyclist has already overcome a life-threatening neck break to ride in an Olympic final seven months later. She is already an Olympic gold medal winner and has claimed 10 world titles.

This will be the last Olympics for Pendleton and she was always planning to go out with as big a gold haul as possible. 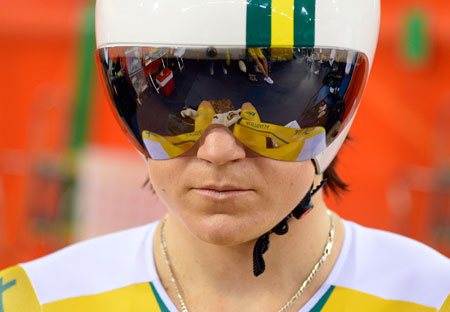 After winning Britain an Olympic gold Jason Kenny said his team mate Pendleton was on course to glory.

“If those two [Meares and Pendleton] do meet there’s no doubt it’s going to be a real humdinger. But there’s no reason to believe that Vicky shouldn’t have the legs, she’s absolutely on fire,” Kenny said.

“She’s really worked on her weaknesses to the point where she hasn’t really got that many to exploit in the race now. So if she just keeps ticking boxes there’s a very good chance she’ll be standing on the top step too.”

Australia will be delighted with the outcome after an Olympics that has been shockingly lacking in gold medals.

Alice Pyne: bucket list girl off to see Take That