Tevez inspired a 2-1 win over Chelsea on his return from exile as a second half substitute at Eastlands on Wednesday.

The Argentine forward set up a winning goal for Samir Nasri as his side closed the gap on leaders Manchester United to one point.

A Sergio Aguero penalty soon after Tevez’s introduction had cancelled out Gary Cahill’s opening goal for Chelsea as City also record a 20th consecutive home league win, a record in the Premier League era and only the fourth time in history a top flight club has reached such a landmark.

Tevez’s appearance from the bench had been greeted by boos from sections of City supporters, still angered by the forward’s self-imposed six-month exile from the club following his refusal to warm-up during a Champions League tie in September.

But Mancini has no doubt that the player will not take long to win over the dissenting few.

“I think it was important that Carlos made an incredible assist for Samir and all the supporters were happy with that,” Mancini said.

“Carlos is maybe not 100 per cent but he knows football and he was important because he was incredible for us. 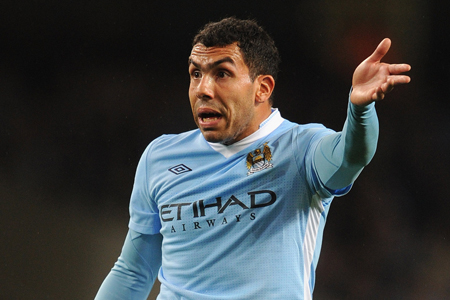 “He’s an important player, he needs another two or three weeks to have good form but when he plays, he knows where to take the ball.”

Mancini also insisted that any ill-feeling between he and Tevez has been well and truly eradicated.

“That was finished a month ago when Carlos came back here,” added Mancini.

City, who face United at Eastlands in April, remain firmly in the title race thanks to Tevez and Mancini is confident they can still wrestle the trophy from Old Trafford.

“I don’t think we have played well the last three or four weeks, we have been so-so, but after tonight something can change. There are nine games until the end and we want to stay there.”

For Chelsea manager Roberto Di Matteo, the decision to start with Fernando Torres in attack, leaving Didier Drogba on the bench, seemed to back-fire and the Spanish striker appeared unhappy, exchanging words with his manager, when he was brought off.

“I just thought to start the game, the dynamic of the team, it was going to be the right decision, he had a very good performance on Sunday,” said Di Matteo of his choice of starting striker.

Meanwhile, Di Matteo refused to be too downhearted by the first defeat of his reign as interim boss.

“Two weeks ago we were seven points behind third place, now we’re six so we are going in the right direction,” he added.