After commenting the a town called Springfield in his home state of Oregon was the inspiration for the animated series’ setting, Groeing (pictured above accepting The Simpsons’ star on the Hollywood Walk of Fame in February of this year), has since revealed that ‘The true location of Springfield is in any state but yours’. 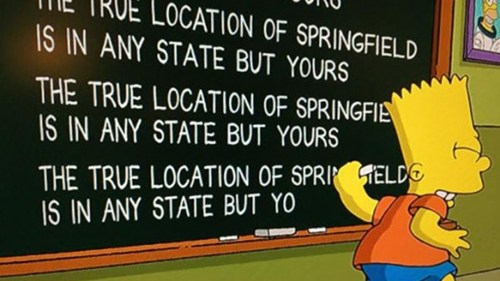 Where did he reveal this? In the show’s opening sequence, this statement being the one that Bart writes on the classroom black board.

“I have no idea where the hell it [Springfield] is,” Groening has backtracked. “Like all Americans, I flunked geography.”

Stop all the moaning; it’s not an orgasm

He’s not the Messiah: Judge orders baby’s name changed from Messiah to Martin