If Ange Postecoglou’s side are to be any chance of snagging a draw, or let’s be crazy optimistic and say a win, it’ll be because these guys play out of their skin.

Here’s the goalkeepers and defenders gathered from around the globe to push Australia’s cause against the world.

Mat Ryan, 22, Club Bruges: If there’s a Socceroo who will win new fans and a big fat cheque from a major club it’s Australia’s No 1. He will be a busy boy but after a string of accolades in the A-League for Central Coast Mariners and last season’s Belgium Pro League keeper of the year award, he has the chops to handle it.

Mitchell Langerak, 25, Borussia Dortmund: The Bundesliga-based keeper is an undoubted talent, but isn’t first choice for the German giants so lacks full-on game time. Has no issue with putting his body on the line though and has valuable Champions League experience.

Eugene Galekovic, 32, Adelaide United: A terrific presence in the squad even if he likely won’t get a run. Unlucky to not have earned more than his eight caps having been behind Mark Schwarzer in the pecking order.

Jason Davidson, 22, Heracles Almelo: The Dutch-based defender appears to be Postecoglou’s first-choice left-back and gave his best performance in a yellow shirt in the last warm-up against Croatia. Is the son of former Socceroo Alan.

Matthew Spiranovic, 25, Western Sydney Wanderers: The 6ft4in back’s story is one of immense talent never quite realised, but with 18 caps (over six years!) he’s the veteran at the back. He was in Germany by 18, has played in Japan and more recently chose playing in Qatar over being down the pecking order for Brendan Rodgers at Swansea. Even when Liverpool called, he turned it down to ensure he played. Maybe the Cup will be his break? 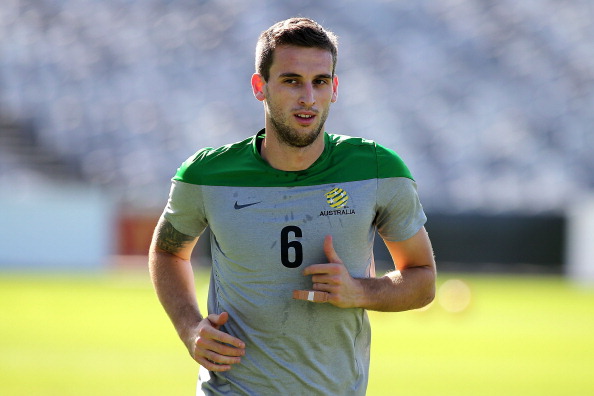 Ivan Franjic, 26, Brisbane Roar: A hard-worker who likes to get forward, his brand of pluck and courage will be vital if the Aussies are to get any joy. Played 90 minutes against Croatia to alleviate injury worries that made his inclusion ahead of Luke Wilkshire a surprise. Was working as a carpenter while playing Victorian Super League before sign as an injury replacement at the Roar in 2009, and hasn’t looked back.

Bailey Wright, 21, Preston North End: The last players from PNE to appear at the World Cup for any nation were bona fide legends Sir Tom Finney and Tommy Docherty… in 1958. A bolter in the 30-man squad let alone the 23, he’s yet to make a full Socceroos appearance.

Ryan McGowan, 24, Shandong Luneng: Was signed for Hearts in Edinburgh aged 18 from South Australia but was bounced around on loan to Ayr and Partick Thistle. Signed for his current club in China in 2013 and has been a mainstay at the back for them. He’s in ‘cos Lucas Neill was axed.

Alex Wilkinson, 29, Jeonbuk Hyundai Motors: Has been a hit for the Green Warriors in South Korea and has been spruiking Australia’s keenness to use controlled aggression as their weapon in Brazil. His chance to impress comes with Curtis Good’s injury omission, but this lanky lad is a chance to start against Chile.

CLICK HERE to meet the Socceroos’ midfielders and forwards

Did Peppa Pig cause the London riots?