Miranda Kerr and Orlando Bloom have released the first picture of their baby boy Flynn.

The picture is showing Miranda lying in bed, breastfeeding her two-week old baby.

Dad Orlando was behind the camera, taking the picture.

Orlando Bloom groupies in the desert

Blogging on her site Kora Organics, Miranda revealed that her newborn son was weighing in at 9lb 12oz and called him: “a very healthy and big baby boy”. 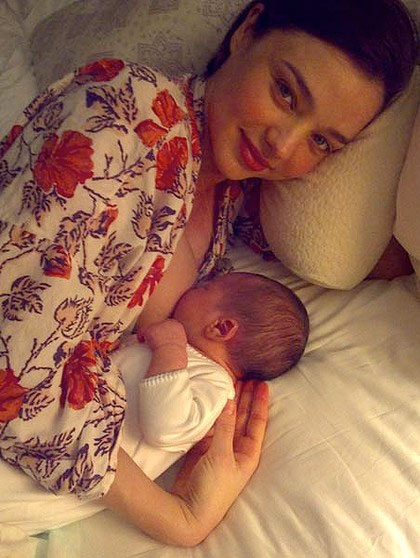 She also thanked her husband for his support during the birth.

“It was a long, arduous and difficult labour but Orlando was with me the whole time, supporting and guiding me through it. I could not have done it without him.

“We are so happy and are enjoying our time together as a family. Flynn is our little ray of sunshine.”

The picture of Miranda and her baby has once reignited the discussion about breastfeeding.

Only last week, new advice was given by the British Medical Journal, which contradicts the government’s present guidelines on how long babies should be breastfed before introducing solid foods.

Nifa McLaughlin, the editor of parenting advice site gurgle.com, believes that the photo of Miranda could encourage more mothers to breastfeed.

According to This Is London she said: “This picture not only captures a wonderfully natural moment between Miranda Kerr and her new-born son, but positively promotes breastfeeding as being a bonding experience between mother and baby.

“Instead of thinking it may pressure mums to breastfeed, it will probably encourage breastfeeding by showing it as a relaxed experience.”

Miranda and Orlando married in a secret ceremony on July 22, 2010.

Only a few weeks later the couple announced that Miranda was pregnant with their first child.

UK Trip: Seal spotting on the Isles of Scilly – a perfect minibreak holiday