Miranda Kerr has posed naked for style magazine Harper's Bazaar and she's looking so good you'd never know she had a baby recently.

In the shoot, the former Victoria's Secret lingerie model seems to be so engrossed with reading the sport pages that she only got as far as putting her red heels and leopard print scarf on. What a pity!

And even though it's only nine months siince she gave birth to Fynn, her son with Hollywood actor Orlando Bloom, she's already lining up girlfriends for the wee lad.

The Australian beauty has told of her admiration for Stella McCartney's 11-month-old Reiley.

age as Flynn so watch out – Flynn might start dating her,” Miranda

said, after hitting the runway for Stella’s Paris Fashion Week

However, Kerr admitted that multi-tasking her modelling career with

breastfeeding and looking after a teething tot has taken its toll.

to Flynn and then try and see him on my breaks,” Miranda explained. “I

was up for hours last night as he’s teething. And when he’s crying, he

She also said that despite being doting parents, she Bloom weren’t planning another baby just yet.

But when asked if there’s

likely to be more Kerr-Bloom babies, the model replied, “Not yet but let’s see.” 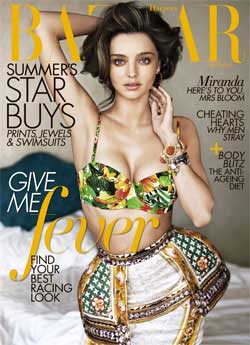 Turner Prize at the Tate