Gough has previously refused to wear clothes on his release from prison out of principle and has continually been re-arrested. He has spent the best part of the last 6 years in prison.

The 53 year old naked protester, originally from Eastleigh in Hampshire, said he was looking forwards to seeing his children.

The police in Tayside near the city of Dundee in Scotland have apparently had a change of heart with regards to Gough’s persistent peaceful naked protest.

“My opinion is that the police have thought ‘the guy’s not going to give up so let’s have a think about it’.” he said as he was released from Perth Prison.

“Something has changed and it is good news for me.  It’s nice to be standing here feeling the breeze. I haven’t been outside a building in six years.” 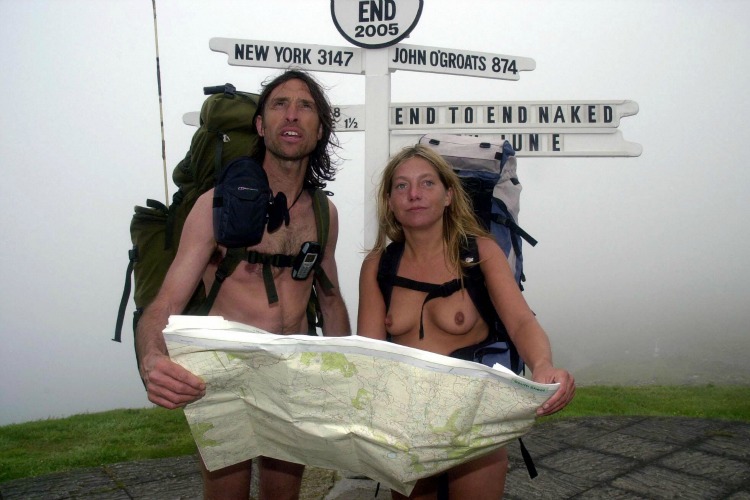 Gough was joined on his naked walk covering the whole of the UK from Lands End in Cornwall to John O’Groats in Scotland by Melanie Roberts in 2005. (Getty images)

The naked rambler also spoke of his teenaged kids and the potential for embarrassment. “I am going to head south and see what happens. I haven’t seen my kids for ages. I want to see my mum as I haven’t seen her for six years.

“My children are teenagers so I expect they are embarrassed by me. If I was them and my dad was walking around naked I suppose I would be embarrassed.”

According to the BBC, Tayside Police said they ‘had a duty to uphold the law but also a responsibility to act in the public interest.’

Gough was not allowed to be in the same area as the other prisoners due to his nudity and was forced to stay in solitary confinement.

“I was kept in solitary all the time. I wasn’t given association with other prisoners. I got half an hour in the evening to have a shower and walk up and down the hall. I missed having a good deep conversation and connecting with people.”

Former marine and lorry driver Gough is staying true to his cause even though he could well be re-arrested elsewhere in the UK.

“I’m not going to give up. Stay naked is the word.”

St Pauls from the South Bank

Flower power: show your Valentine you care, even from far away