Spread across 15 rooms in a private house in Soho, this NYE party promises everything from burlesque and cabaret dancers to complimentary drinks all night and a BBQ. There’s also retro arcade games, DJs spinning tunes ‘til late, fireworks and a karaoke room for when you’re feeling brave enough. Metparties members get tickets at half price. And it’s black tie, so dress smart.

Pull out all the stops and dress as your favourite Hollywood actor for the night. The vibrant venue will be suitably themed with Marilyn Monroe movies flickering on the walls, red carpet, Oscars – and glamorous hosts pouring complimentary sambucca and tequila. Options include dinner or just the entertainment, which features burlesque dancers, cocktail lessons, speed dating and karaoke. 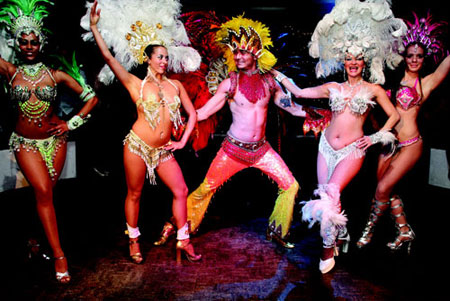 Add an authentic Brazilian twist to the start of 2012 with this 11-hour party. With an impressive line-up of music, DJs and performers, Guanabara is promising a flamboyant night of singers, samba and culinary delights. There will also be live feeds from Copacabana Beach in Rio de Janeiro and from the fireworks on the Thames.

Pirates of the Adriatic, The Larrik Inn

Pull together pirate-themed togs for this treasure-filled event which kicks of with a free glass of bubbly. Enjoy live music, DJs, drinking games, and the best dressed will win Sail Croatia prizes. What better way to see in 2012 than with other TNT readers?

Around the world in 8 New Year’s Eves, Adventure Bar

How much do you love NYE? Lots? Then celebrate it eight times in one night, with a count-down every hour. Whether you’ll feel as though you’ve aged eight years in one night remains to be seen.

See in the New Year with a strike at this cosy retro Fifties bowling lane, with Craig Charles and other top-class DJs on the decks and a performance from masters of swing, The Correspondents. You’ll be greeted by fire-breathers, so lay off the shots ‘til later.

This pop-up experience will be holding its NYE party in a used factory in east London. You’ll enjoy top-class food and drinks, then the venue will transform into a club with upbeat DJs.

Chill out, literally, this NYE in freezing temperatures at Belowzero ice bar. Celebrating the best of British, each room will be themed accordingly, and guests are expected to don suitable fancy dress. There are prizes for the most creative outfits, as well as three different-priced tickets, starting from £39 and including champagne, live entertainment and breakfast – so expect to party like it’s 2011 ‘til the small hours.

This venue promises spectacular views over the Thames for NYE. It’s also an over-25 event, so you won’t need to contend with youngsters getting too drunk and spoiling the party. The Lovesoul DJs will be mixing everything from hip-hop and funk to pop
and Bollywood. They’ll be supported by So:Fresh spinning upbeat old-school classics. Boom.

It’s all vampy vintage at this sexy supperclub for NYE. Expect a hedonistic evening of glitz and glamour. Dressed in clothes from the Twenties and Forties, you’ll kick off the evening with a three-course meal followed by a special show. Think live music, comedy and burlesque. And that’s just for starters. Come 9pm, the vibe turns into a sultry speakeasy with a retro soundtrack courtesy of The Black Cotton Club. Choose to either go to the whole event or just to the club night. 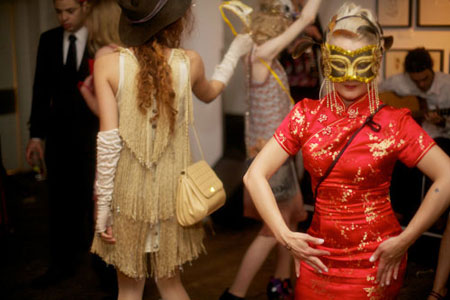 Nowhere does masked balls quite like The Last Tuesday Society – don’t attempt to make your own mask, as it’s a serious affair … although clothes are optional. Held in a former church, there’s a torture chamber where you’ll be fed live oysters. Upstairs is the Banquet Of Jezebel where you can gorge on cheeses, cakes and ‘drown in the chocolate fountain of gluttony’. Dressed in divine decadence fancy dress, you’ll then dance the night away to delightful DJs including The Delinquent Dandy.

Has 2011 been a pretty dismal year? Then laugh it out the door at this comedy fest. Boasting star of Michael McIntyre’s Comedy Roadshow Imran Yusuf, magician Pete Firman and impressionist Stefano Paolini, the night is bound to put a smile on your face. And the venue turns into a club afterwards with top DJs. Bonus.

If you’re all about the tunes, this DJ showdown will be banging music to your ears. Mr Thing will be going head-to-head with Harry Love, Chris P Cuts and Kidkanevil. Expect hip-hop, soul and grime with Iron Braydz on mic duties at this two-floor venue.

You’ll need to crack open a couple of Red Bulls at least at this 12-hour dance epic. Resident DJs Craig Richards and Terry Francis will be setting the pace at this flagship underground venue.

You can always rely on this venue for a good laugh, and NYE will have it in spades. Dress up as your favourite retro toys and cartoons, then have a proper old-fashioned knees-up as you rock 2012 in with DJs playing indie and pop at this traditional boozer.

Know how you’ve always wanted to dress up as Mr Brown from Reservoir Dogs? Well now you can. Just expect clowns to the left of you, jokers to the right … no different to most nights out then. 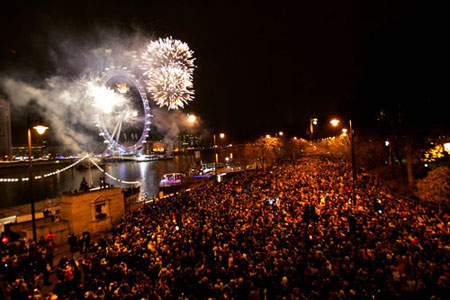 Last year, some 250,000 people turned out for the London Mayor’s firework spectacular. Bag yourself a top spot at one of the vantage points between Waterloo and Lambeth bridges on both the north and south side of the river. The fireworks will be launched off the 135-metre-high London Eye. Oooh.

Not everyone welcomes a new year with open arms, so here’s a club night catering for misery as well as merriment. Feeling Gloomy will be wallowing in tunes from The Smiths, Depeche Mode and Joy Division, while a second room, Club De Fromage, will host fancy dress with sounds from Kylie, Abba and Bon Jovi.
Be careful which you choose.

Man with 45kg scrotum needs £600k surgery to shrink it