Eager fans keen to get their hands on a piece of sci-fi history are expected to bid up to £20,000 for the item, which is being auctioned off in London next week.

The item is described as “moulded and painted resin handle with gold and red knobs, short green plastic tube ‘blade’, in custom display case with background information and certificate of authenticity” by auction house Bonhams. The sale takes place on Thursday 15 December.

Some fans are sceptical that the sale will go through as LucasFilm are fiercely protective of the ownership and copyright of props used in their movies. The lightsaber, a shortened version used for the green-screen fight sequences, was given to a member of the production cast who now wishes to sell. 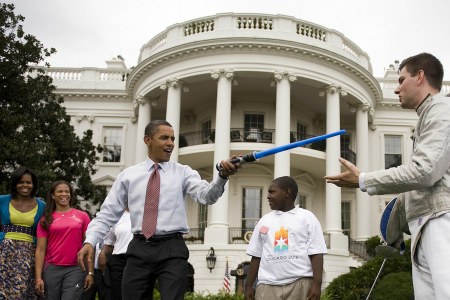 Whitehouse Jedi Knight: President Obama larks about with a lightsaber in 2009 (Getty images)

The sale is likely to have been timed to coincide with the rerelease of the six films in the Star Wars saga as remastered BluRay editions.

A lightsaber prop used by Mark Hamill in the 1977 original Star Wars film ‘A New Hope’ made a whopping £133,000 at an auction in 2008. The futuristic sword was sold by film producer Gary Kurtz at a Hollywood auction house.

Video: Ewan McGregor waves his lightsaber around on the Graham Norton show

How hip is your neighbourhood?