A memo was leaked online yesterday stating that due to McDonald’s sponsorship of the London 2012 Olympics, chips were not permitted to be served as a dish on their own. 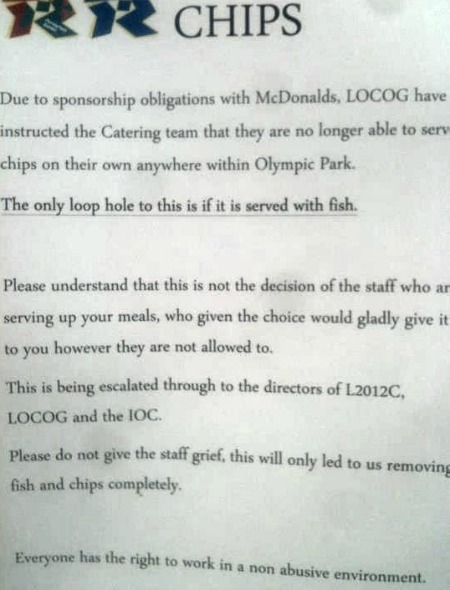 We can all breathe a huge sigh of relief that our overseas visitors will be permitted to indulge in the Great British tradition of deep fried chipped spuds –  the embargo has officially been lifted.

McDonald’s, who have built the world’s biggest branch of the fast food chain in the Oympic Park, secured a deal with LOCOG meant that they had exclusive rights to sell chips in and around Olympic venues – other caterers were permitted to sell chips only if they were accompanied by fish.

“It’s sorted. We have spoken to McDonald’s about it.”” a spokesman for LOCOG told The Guardian.

However, the chip ban still stands in other parts of the Olympic Park.