One of life’s mysteries solved: It’s “Nikey” not “Nike”

Despite being one of the world’s biggest brands, most of us have no idea how to say the name properly.

And in a bid to get to the truth, and settle a bet (good on ’em), two men – Ben Martin and Kendal Peters – sent Nike chairman Philip Knight a letter asking for clarification.

The pair, both creative advertising students, wrote to Sportsmail to say: “We had had this friendly bet between us for a while now and decided to write to Phillip Knight to once and for all settle one of life’s biggest unanswered questions.

“We included a stamped addressed envelope inside the letter so that he could simply circle the answer and send it back to enlighten us all. We didn’t actually think that he would do it. But all credit to him, a few weeks later the letter returned!”

So there you have it. Nike doesn’t rhyme with “bike”. 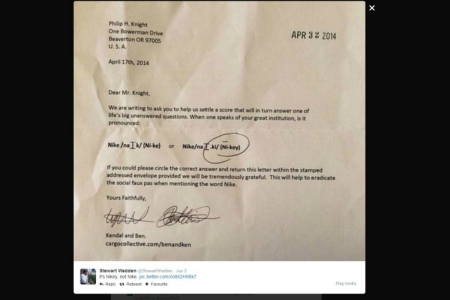 Image via Getty and Twitter/@StewartWadden

London sound: The hottest music gigs and club shows this week, including Bjork and DJ Yoda

This Is The End – film review: Starring James Franco and Seth Rogan