Metro reported Derwentside Police have posted a picture on their Twitter account of a grey, red and black Nike Air Max shoe which was left by a man after a bungled shoplifting attempt at a County Durham Co-op shop.

The crime was alleged to have happened at about 9.30pm yesterday before the man fled the scene, without one of his shoes.

@DsidePolice tweeted: ‘At 21:30 on 27th a man tried to steal cider from the Co-op on Tyne Rd, Stanley leaving this trainer behind. Did you see him or know who he is? Info to PC2432 at Consett via 101 #cinderella’ 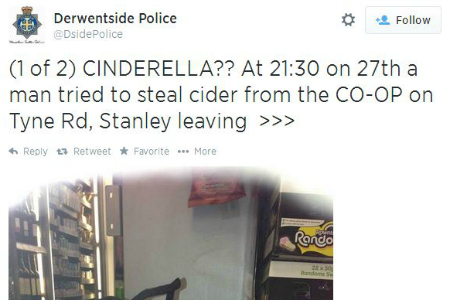 Policeman in court over assault