The move was cause for authorities to increase security at French offices across the Muslim world.

The cover of the issue features a turbaned figure in a wheelchair being pushed by an Orthodox Jew. The magazine contains more caricatures of the Prophet Mohammed, among them pictures portraying him naked.

Many Muslims consider all representation of the Prophet Mohammed or Allah extremely insulting.

In 2005, waves of protests occurred following the publication of Danish cartoons of the prophet and at least fifty people were killed. Last November the Paris offices of Charlie Hebdo were firebombed in response to a comical portrayal of the prophet.

“Is it relevant and intelligent in this environment to add fuel to the fire? The answer is no,” Fabius told France Info radio. “I’m very worried… and when I saw this I immediately issued instructions for special security precautions to be taken in all the countries where it could be a problem.”

However, much like officials in the United States the French government has appealed for calm over the publication, reinstating that free speech is vital to their societies. They also asked those offended by the pictures to seek legal action in place of violence or protests.

In addition to the government, Muslim leaders in France have asked for people to remain composed during these events.

The protests over the privately funded film made in the US have spread from the Middle East, Africa, Asia and as far as some Western countries. When a request for a march against the film was made in Paris it was rejected by authorities.
French Prime Minister Jean-Marc Ayrault told RTL radio, “There is no reason for us to allow conflicts that do not concern France to enter our country.” 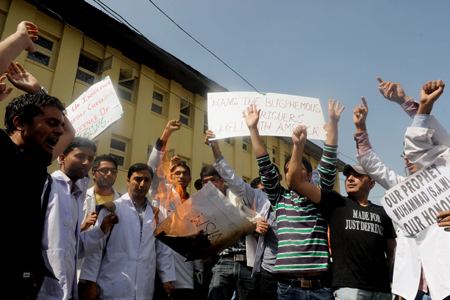 Roughly 150 people were arrested on Saturday after they took part in an unauthorized protest at the U.S. Embassy in Paris.

The publication comes at the same time as the Pakistani government announced that it will declare a national holiday for the Prophet Mohammed this Friday.

The “day of expression of love for the prophet” comes after many religious groups in Pakistan appealed for protests on Friday against the “Innocence of Muslims” film.

The leader of an eminent Sunni party, the Sunni Tehreek, urged people across Pakistan to hold rallies against the film and to close their businesses. Sources report that many companies in Karachi, the largest city in the country have given their support to the protests.

Why you should visit York this Christmas