We imagine the Queen thinking: ‘You might find the stairs tricky, my dear’ as Hayrunnisa Gul, the Turkish President’s wife, teetered on her killer heels at Buckingham Palace.

As Turkish president Abdullah Gul and his wife took to the red carpet before lunch at the palace, the Queen, in her usual sensible court shoes, appeared somewhat taken aback by her glamorous guest’s footwear. 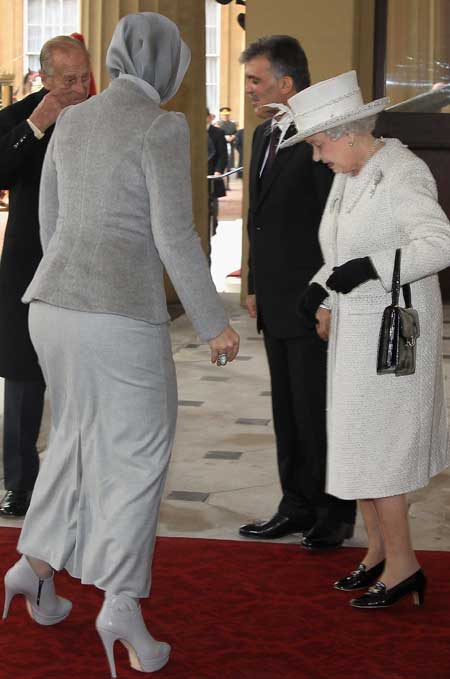 She may have been fretting Mrs Gul tripping up on the carpet, but there was probably no need. Mrs Gul is something of a stilleto expert. In September she walked on cobbles at Berlin’s Brandenburg Gate in five-inch heels. In October she was seen treading carefully in six-inch platforms at the presidential palace in Ankara.

At Buckingham Palace, it was a wobbly beginning, but Mrs Gul put her best foot forward for her royal experience. After lunch the

Queen treated the Guls to an exhibition of Turkish-themed antiquities.

Abdullah Gul is on a three-day visit of England, which began with a ceremonial greeting under grey, overcast skies on Horse Guards Parade in Whitehall.

Video: Elephant goes on the run from Irish circus