I set off with a group of eight other delusional crazies. There was a guide armed with a shotgun to ward off bandits (apparently a big problem up there at the top – never mind the exploding lava – I’m not joking either). There was also a man with a horse for the inevitable lazy bastard who opted for the “taxi natural” over the 4km walk at an altitude of 1000m (a French-Canadian girl took him up on the offer after about 20 minutes), and a dog.

The walk to the base of the peak took about two-and-a-half hours and was not easy. It was very steep and bloody hot. There was one princess from Los Angeles who kept lagging behind and crapping on about pool parties and her fashion designing job back home. When it got really tough she started whining:

Another girl from Canada turned around and said: “We’re climbing a volcano. We all look like sweaty pigs out of breath. 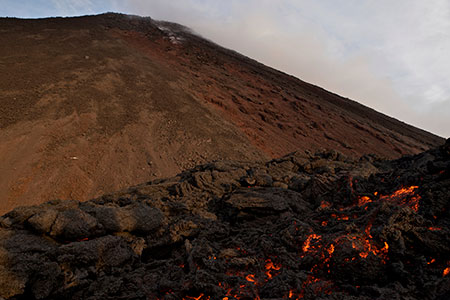 The views along the way were incredible, it was like something out of The Lord of the Rings. Clouds (or gas from the volcano, I’m still not sure which) rolled down the hills and around us, sometimes making it hard to see more than 20 metres.

I was actually really impressed with my fitness along the trek. I was always first to the next meeting point with the guard waiting for the others. Then we hit the gravel of volcanic rock for the last kilometre. Holy **** it was hard!

It was unbelievably steep and metres deep – like trudging and crawling through quicksand, but not soft. Sharp, black rocks filled our shoes and it was like taking two steps forward, one step back, sliding down very close to a very, very steep drop. At one point I was ready to burst into tears of anger and head back down. Whose stupid idea was it to climb a live volcano anyway?

But then we appraoched the top and my God it was all worth it. The ground under our feet was trembling with each mini explosion and we were surrounded by sulphuric gas, which was actually the worst part for me. It was really scary being out of breath and not being able to breathe fresh air at the top of a volcano! 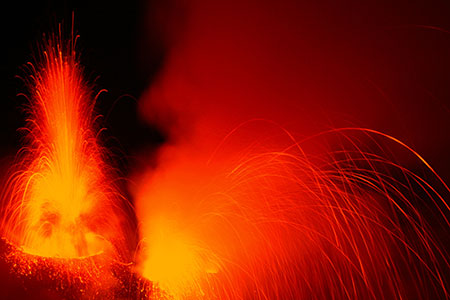 Then I saw the lava! I didn’t realise it was going to be that live and that we were going to be that close! We were dead-set 15 metres from the opening that was spewing red-hot molten rock into the air, and miraculously not landing on us! As one Swedish guy put it very poetically: “It’s like mother earth’s butthole.” The Swede is now travelling with us.

It was at this point that our guide told us if the wind changes, or something goes wrong, watch the dog – he knows where to go. Apparently there had been a mini explosion that morning, that was why he had been stopping along the walk up to check the situation with his binoculars.

We had enough time up there to take photos, eat half a bread roll and for the rubber on our shoes to melt. Then the guide started getting edgy and said we all had to leave. To get back down we literally had to ski on the gravel, turning into snow plows to stop ourselves losing control and hurtling down to eat rock at the bottom.

It was awesome fun but I was hopeless and kept falling on my arse, until the nice guide gave me his arm to hang on to. It was then that I got chatting to him.

”There is usually a huge eruption every six years,” he said.

”Thanks for the warning, mate,” I said, lucky to be alive.