But one picture appeared to show a white powder substance on the top of his head.

The picture was accompanied by the caption: “Memories don’t live like people do #coachella.”

The 24-year-old star wrote on her Twitter page: “I’m crazy, and I don’t pretend to be anything else.”

Over 1,000 fans commented on her antics, suggesting that she appeared to be “rolling up on his head”, and with others saying the white substance might be cocaine.

One fan called it the “coolest thing i have ever seen”, and another said: “Wait I’m still picking up my jaw that I dropped (sic).” 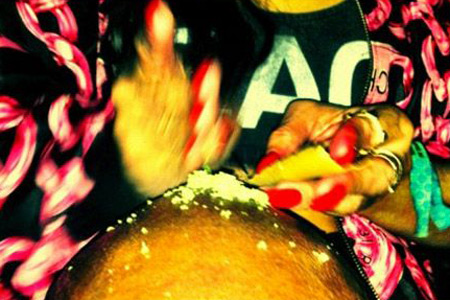 But the star lashed out at media sites that shared the images, Tweeting: “@MTVUK = PATHETIC CUNTZ.”

The singer was pictured earlier this year on holiday in Hawaii, smoking what appeared to be marijuana.

But it was back to business last night as she performed at a Steven Spielberg cancer benefit.

Eating and drinking in Lucca