This year it’s former cricketer Rodney Hogg who decided that pouring petrol all over an already culturally divisive day would be a cracking idea.

While not going as far a portraying the prophet Mohammed in cartoon (even a man with a few cricket bats around the house doesn’t want a fatwa upon him), Hogg let fly on followers of Islam with a crude reference to Allah.

“Just put out my aussie flag for Australia Day but I wasn’t sure if it would offend Muslims…So I wrote “Allah is a shit” on it to make sure,” Hogg tweeted at lunchtime on Australia Day.

The former Test fast bowler later apologised, and brought all his countrymen and women into the controversy, by tweeting: “Bad attempted Australian humour, sorry if I offended you.” 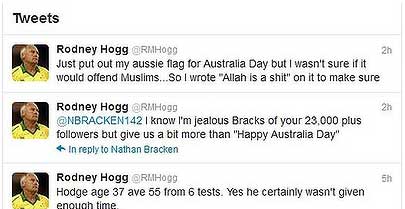 What do you think? Let us know at letters@tntmagazine.com.

But before you jump up and down about Hogg being ‘racist’, remember that Islam is a religion, not a race.

When that explanation was also met with angry responses, Hogg tweeted again.

‘‘My sincere apologies to the Muslim community. A stupid tweet by me in very bad taste,’’ Hogg tweeted.
Ikebal Patel, president of the Australian Federation of Islamic Councils, said Hogg’s remark was absolutely despicable..

“It’s not at all humourous. If that’s level of his humour then god help him.”

Hogg’s comment sparked an angry backlash in the twittersphere.

And @ozthai tweeted: “You don’t have to agree / follow someone else’s religion but at least have the common decency to show some RESPECT” and “Hogg , you are an ill mannered BIGOT”.

Before The Flood added to BFI London Film Festival

Other traveller reviews on Wales