Jurors were sent out more than a week ago to consider the 12 counts of indecent assault against the 84-year-old and returned a guilty verdict just after 3pm UK time this afternoon.

Harris had denied all the charges against him but now faces up to ten years in jail. He will be sentenced on Friday at Southwark Crown Court. 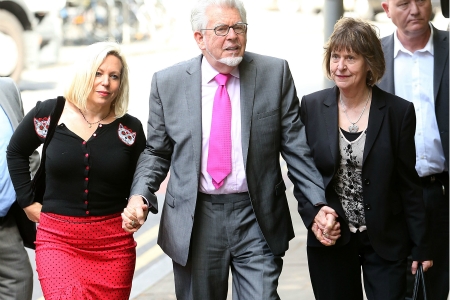 During his seven-week trial, prosecutors portrayed the entertainer as a “Jekyll and Hyde” character, who had a dark side to his personality.

According to the BBC, Mr Harris claimed to be a ‘touchy feely sort of person’, and he labelled claims that he performed an obscene act on a friend’s 13-year-old daughter ‘ludicrous’.

He said that they had taken part in consensual sexual acts together when she was 18, and he was 53, and described how he had taken a cup of tea into her bedroom when he had been staying at the family home, and she had kicked off the duvet, showing her legs.

They were intimate together the next time he visited her home, but he said the encounters left him feeling ‘guilty’.