Cristiano Ronaldo gave a fan his t-shirt after breaking the man’s nose when he accidentally kicked a ball into the stands. A video of the touching episode has gone viral on Youtube.

Real Madrid star Ronaldo was into the first half of a match with Getafe earlier this week when he booted a ball into the face of an unsuspecting fan. 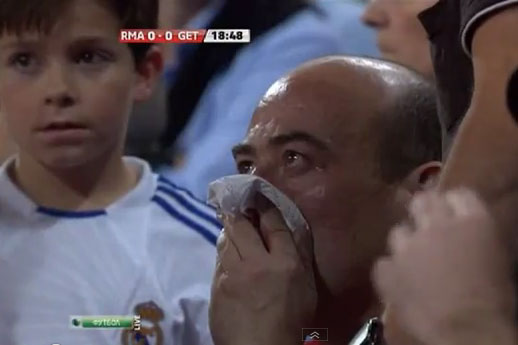 A Real Madrid fan sits bleeding with a broken nose after Ronaldo booted a ball into his face.

Ronaldo failed to notice medics rushing into the stands to tend to the man’s broken nose. However, when someone told him what had happened after the game, he whipped his shirt off, scaled the barriers and tried to hand the sweaty – but eBay sellable – clothing to the bleeding fan.

The fan did not, in the end, receive the shirt that Ronaldo had worn as the footie star was handed a clean one to present instead.

After handing over the t-shirt to the man with the broken nose, Ronaldo posed shirtless for a few snaps. 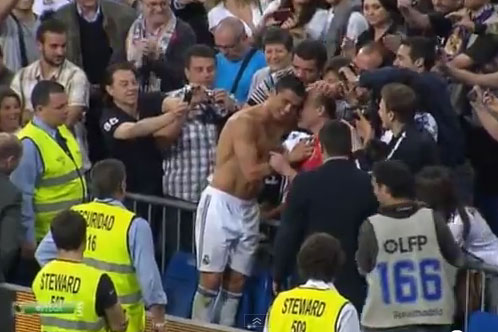 Ronaldo hands his shirt to the broken-nosed fan.

The clip has proved mega-popular on Youtube and has been watched nearly three million times since it was uploaded on May 10.

Ronaldo’s camera-friendly apology has won him some approval. “I wish he broke my nose,” gtarater1000 wrote on Youtube.

Some, however, are concerned that the damp and smelly shirt would have made a better gift.

“Don’t you think the dirty one would have been more sentimental?” asks IxJ3ZxI.

Watch Christiano Ronaldo give a fan his t-shirt.