When 10-12 May
Where Brighton
The Vibe A huge festival with hundreds of acts as well hotels and hostels for those not keen on smelly tents.
Line-up DZ Deathrays, Maximo Park, We Are Scientists, Mystery Jets, Dry The River and more.
Tickets £49.50

When 17–19 May
Where Liverpool
The Vibe Showcasing some of the biggest indie acts around for a three-day fun-filled party.
Line-up Alkaline Trio, Death In Vegas, The Temper Trap, Bear In Heaven, By The Sea.
TICKETS £45

When 25-27 May
Where Between Leicester and Market Harborough
The Vibe A relentless electronic party in a beautiful location, with beautiful people and “unrestrained hedonism”.
Line-up Audio Bullys, Spektre, Mark Broom, Ed Solo.
Tickets £65+

When 3 June
Where Castle Park, Bristol
The Vibe A team from Glastonbury have set up a festival purporting to be “a mecca for British music”.
Line-up Annie Mac, Roots Manuva, Bonobo, Mr Scruff.
tickets £25+

When 3–4 June
Where Newcastle Upon Tyne
The Vibe After the success of previous years, expect more chart-topping acts than ever.
Line-up Dizzee Rascal, Maximo Park, Deadmau5, Miles Kane.
tickets Weekend from £35, day passes £25

When 8–10 June
Where Loch Ness, Scotland
The Vibe A festival on Loch Ness speaks for itself! Indie, electro, rock and everything else in between.
Line-up Biffy Clyro, Mumford & Sons, Deadmau5, Friendly Fires, Justice, Ed Sheeran, Noah and the Whale.
tickets £159

When 9–10 June
Where Platt Fields Park, Manchester
The Vibe Expect this to be a mammoth carnival to welcome the summer, with top music and some of the best artists and bands of their respective genres.
Line-up Flaming Lips, Dizze Rascal, Justice.
Tickets Weekend tickets £64.50 including booking fee

When 14–17 June
Where Houghton Hall, Norfolk
The Vibe A full-on electronic music fest where you can party the night away as it’s licensed until 8am.
Line-up Daedalus, Sven Vath, Vitalic, Pretty Lights, Rusko.
tickets £135

When June 23–July 8
Where Eden Project, Cornwall
The Vibe More day events than a festival, so leave your tent at home. It’s set against the stunning backdrop of the project’s twin eco-domes.
Line-up Tim Minchin, Blink 182, Example, Frank Turner and the Sleeping Souls, Plan B, Noah and the Whale, The Vaccines.
Tickets £35+

When June 29–July 1
Where Hop Farm, Kent
The Vibe Expect none other than Bob Dylan at this fest, which prides itself on no sponsorship or branding. Just how Dylan used to be.
Line-up Bob Dylan, Peter Gabriel, Maximo Park, The Stranglers, Suede.
Tickets Weekends £162

T in the Park

When 6–8 July
Where Balado, Kinross-shire, Scotland
The Vibe One of the most popular festivals in Britain – some artists consider it the best around. Known for its lively audiences, too.
Line-up Snow Patrol, Calvin Harris, Stone Roses, Jessie J.
Tickets £179+ 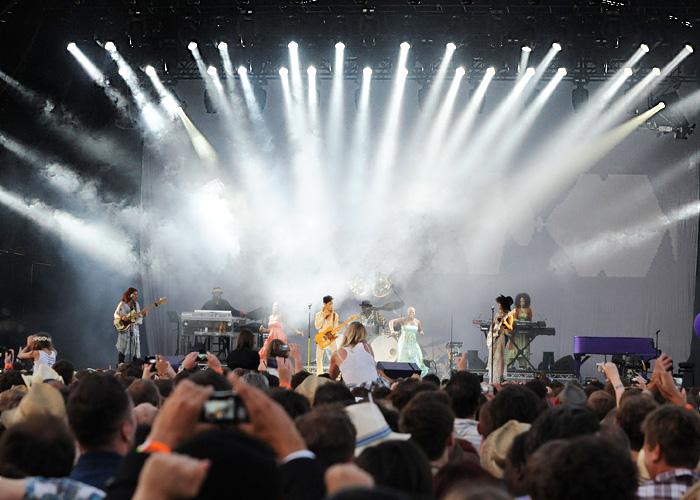 When 13–15 July
Where Henham Park, Sunrise Coast, Suffolk
The Vibe With some incredible activities, including a literary arena, contemporary art exhibitions, forest and lakeside stages, this is the festival for culture (and the cous-cous middle classes).
Line-up The Modfather Paul Weller, Elbow, Bon Iver,  Jack Dee, Tim Minchin.
Tickets £75+

When 13–15 July
Where Stoke Park, Guildford
The Vibe It’s been nominated twice as the best medium-sized festival in the UK, so expect this to be busy.
Line-up Olly Murs, Jools Holland, Jimmy Cliff, Tim Minchin, Tulisa.
Tickets Weekend £135.50

When 20–21 July
Where Hill Farm, Steventon
The Vibe A rock, indie and electronica fest with ‘a little touch of village’.
Line-up The Temper Trap, Get Cape. Wear Cape. Fly, Mystery Jets, The Low Anthem.
Tickets Weekends £59+

When 26–29 July
Where Cherry Hinton Hall
The Vibe One of the longest- running festivals in the world, this popular event is renowned for its folk-focused line up. There are also music workshops and a young musician competition.
Line-up Billy Bragg, Four Men And A Dog, The Proclaimers.
Tickets Weekends £120

When 27–29 July
Where Bromyard, Herefordshire
The Vibe With sounds from folk to punk and a myths and legends theme, this festival is “a rural slice of English eccentricy”, according to Russell Howard.
Line-up The Proclaimers, Dreadzone, Skinny Listers, The Correspondents.
Tickets £80 weekend

When 27–29 July
Where Broughton Hall, Yorkshire
The Vibe Aside from the great name, this promises to be one of the most imaginative festivals in the North and the ultimate escape to the country. Don’t miss out.
Line-up Chic, The Charlatans, Lucy Rose, Benjamin Francis Leftwich.
Tickets Weekends £119

When 26-29 July
Where  Lulworth Castle, Dorset
The Vibe One of the premiere summer events. Expect fairground-style fun, art performances as well as rock and electronica.
Line-up Happy Mondays, Kool and the Gang, DJ Yoda.
Tickets Weekends £185

When 9-12 August
Where Matterly Estate, Hampshire
The Vibe A town packed with restaurants, houses, back alleys, stages and cinemas, is constructed. Or, as the organisers say, it’s “the UK’s maddest city.” One of a kind.
Line-up Reel Big Fish, Asian Dub Foundation, Caspa
Tickets £90+

When 10–12 August
Where  Cornbury Park, Oxfordshire
The Vibe This is billed as a celebration of the arts, but also expect cricket, top meals and stunning surroundings.
Line-up Wilco, Spiritualized, Field Music, Stornoway
Tickets £119+

When 17–19 August
When Glanusk Park, Wales
The Vibe Set amongst truly spectacular scenery, Green Man is back with its famous mix of fun and frolicking, and the odd spot of music, comedy, art workshops and shows.
Line-up Van Morrison, Adam Buxton, Cashier No 9.
Tickets £145+

End of the Road

Things to do in Brisbane

the ‘belt man’ in Chefchaouen, Morocco