But it turns out not everybody loves them.

Sydney mother Paul Orbea certainly isn’t  a fan and has started a Change.org online petition (signed by over 80,000 people) to eliminate what she describes as “misogynistic and degrading slogans and imagery” from their vehicles.

She took offense after her 11-year-old daughter saw van with the slogan “In every princess, there’s a little slut who wants to try it just once”.

“My daughter was upset by this because she felt, as a girl, that the slogan was referring to her and it made her fear being perceived that way,” Ms Orbea wrote.

“This particular phrase promotes paedophilia and resonates very badly with everyone who thinks it’s abhorrent to sexually assault a girl, especially by groomed males who think ‘she wants it’.”

Popular amongst backpackers around the world, Brisbane-based Wicked Campers has already been the subject of complaints to the Advertising Standards Board for its explicit spray-painted graffiti artwork and controversial slogans. 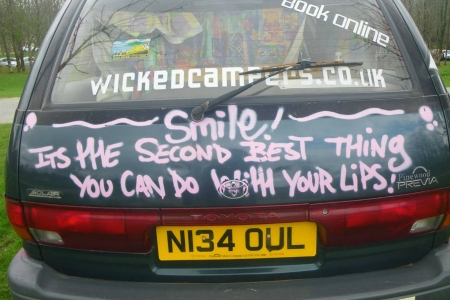