The Art of the Brick: DC Super Heroes comes to London

Following a successful run in Madrid, The Art of the Brick: DC Super Heroes makes its London debut on 1st March 2017. The contemporary art exhibition will be shown in an exclusively built space on London’s South Bank, home to the capital’s cultural quarter. Together with Warner Bros. and DC Entertainment, the well-known and celebrated artist Nathan Sawaya has created the world’s largest collection of artwork inspired by DC’s Justice League, including Batman, Superman, Wonder Woman, alongside DC Super-Villains the Joker, Harley Quinn and more.

Through a series of immersive galleries, The Art of the Brick: DC Super Heroes showcases Sawaya’s interpretations on characters, vehicles, environments and themes found throughout DC Super Heroes mythology including transformation and reinvention, strength and weakness, as well as good vs. evil. 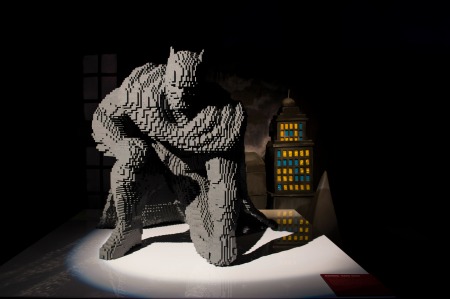 The Art of the Brick: DC Super Heroes exhibition includes more than 120 original pieces, created exclusively from LEGO bricks, including a life-size Batmobile (5.5 meters) and built from half a million standard pieces. Sawaya has captured on a real scale some of the most iconic Super Heroes and Super-Villains from DC, exploring more than 80 years of history.

The Art of the Brick: DC Super Heroes is in partnership with Warner Bros. Consumer Products and DC Entertainment. The exhibition holds true to the creative disciplines of Sawaya’s original touring exhibition, The Art of the Brick, which encourage inspiration, education and participation and has been seen by millions of people in more than 75 cities across six continents. Award-winning and record-breaking, CNN rated it as one of the world’s “Must See Exhibitions.”

The Art of the Brick: DC Super Heroes

Last admission one hour before closing

Family (must include at least one child): £45

Monday Saver – all tickets £10 Tickets can be bought from www.aotbdc.co.uk

Thatcher: ‘Don’t waste money on a flypast at my funeral’ – The Iron Lady humble to the last