The Enchanted Forest to release more than 65,000 tickets

The show, which runs throughout October, attracted a record 62,000 visitors last year and smashed box office records. This year, more than 65,000 tickets are going on sale, which will open to the general public at 10am on Friday 17 June.

The 2016 show, which has been revealed as SHIMMER, will use dazzling visuals and an original music score, and runs from Thursday 29 September to Friday 30 October at Faskally Wood near Pitlochry. This year’s event will also see the return of the multi-award-winning creative team of Kate Bonney and Simon Hayes as lighting designers, and RJ McConnell and Jon Beales providing sound design and composition.

The Enchanted Forest, which last year extended its season due to popular demand, brings in an estimated £2 million to the local economy. It was recently awarded the coveted Scottish Rural Award for Tourism & Hospitality 2016, beating off stiff competition from more than 50 of Scotland’s top tourism businesses. 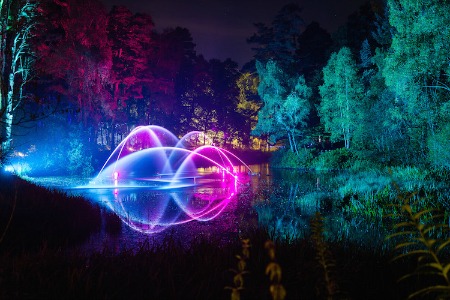 Ian Sim, acting chairman of The Enchanted Forest, said: “Every year our show lights up the countryside of Perthshire and boosts our tourist trade. The show we have planned for this year is remarkable and will prove to be a must-see for visitors. As a charitable trust, we are delighted to be able to direct proceeds from a special preview show on Thursday 29 September towards three highly important charities in Scotland. As the show goes from strength to strength, so our charitable net widens, which is extremely heartening.”

“As a community-based event, we are committed to not only giving the community an exceptional place to visit every Autumn, but also to giving back. Our three charities have been chosen because of the important work they do across Scotland, and we’re proud to name Kidney Kids Scotland, British Heart Foundation Scotland and Scotland’s Charity Air Ambulance as this year’s beneficiaries. We also can’t wait to share all the dazzling new visuals and music we have up our sleeves.”

Tickets will go on sale to the public at 10am on Friday 17 June at www.enchantedforest.org.uk

Thatcher: ‘Don’t waste money on a flypast at my funeral’ – The Iron Lady humble to the last