The Isle of Jura: Dramatic whirlpools, stunning wilderness and top-notch whisky on this secluded Scottish island

“The bigger the wave, the bigger the dram,” says our skipper, Nicol, dispensing socking great measures of whisky to those of us huddled on the rear deck of his tiny boat.

Adrenaline is coursing through my body, but so far my newly acquired sea legs are holding out, no small thanks to the warm smack of the liquor.

I’m on a terrifyingly choppy ride through the waters off the Hebridean Isle of Jura, heading straight for the Corryvreckan, the third biggest natural whirlpool in the world; this 50-minute journey is a race against time to see the swirl at its most dramatic.

Without warning, the deck repositions itself several meters under my feet, and I can suddenly feel the circular pull of the whirlpool tugging the boat.

The outer reaches suck us in and rolling waves rise on all sides, climbing four metres high, so all I can see are walls of water.

Nicol’s skill as a skipper is to keep us ahead of the crest of each wave, but the engine of the little boat is having to fight hard to manage it. 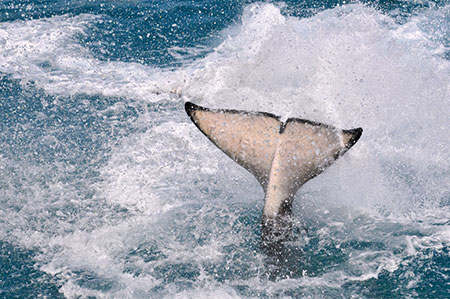 I’m hopelessly disorientated and as the boat rises and plunges, the only way to gauge just how far from upright I am, as I grip the bars of the rear deck, is to watch the horizon and surrounding mountains disappear behind the waves.

Surely that’s not supposed to happen.

Nicol stashes the bottle expertly down the back of a seat and swiftly takes the wheel, steering us to calmer waters.

And it strikes me that rather than being scared, I’ve got that post-rollercoaster wobbly euphoria – as well as brimming with pride at not having spilled a drop of my whisky.

“You’ve lived life on the edge today,” Nicol says as we head back towards the jetty. “Another dram?” Count me in.

It may be one of the most remote corners of the British Isles, but you could never accuse Jura of being boring. 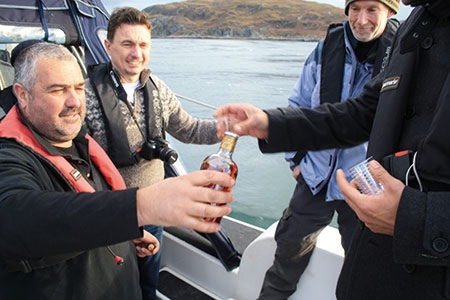 Its seclusion, depending on your emotional state, lends Jura either a sense of startling loneliness or complete freedom. Mobile phones generally don’t work and you’ve had too much whisky if you think you’ll ever pick up 3G.

This is wild terrain, a patchwork of craggy rock faces, purple heathers, golden grasses and white sand beaches, surrounded by stormy seas which are home to dolphins, seals and basking sharks, too.

It was this very wildness that attracted our tour guide Alex, the Glaswegian owner of Jura Island Tours, along with the fantastic myths and legends that are such a big part of the island’s character.

Alex keeps us entertained with all sorts of tales as we cross the island. 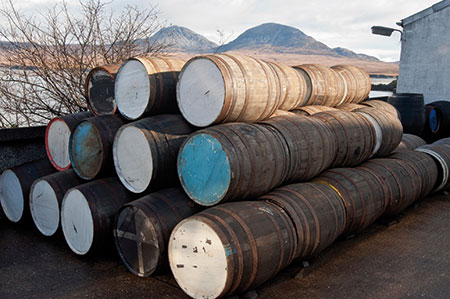 There are stories of bonkers landed gentry, such as Lady Nancy Astor, Britain’s first female MP, who used to hit golf balls from the roof of her study into the sea.

Then there’s Jura’s ghost car, which shines its phantom headlights on deserted roads before disappearing. And of course, there’s a buried gold legend. “See that rock?” says Alex.

“Aye, there’s supposed to be treasure buried there. But there’s a curse.

If anyone takes it, they’ll die within a year. In my retirement, I’m going to buy a big metal detector and go down there.”

Eventually we arrive in a secluded bay, empty save a trellis table with a walkie-talkie in a lunchbox.

Press the button, place an order and 10 minutes later a lovely lady called Georgina from down the road furnishes you with an extensive cream tea.

After eating, it’s finally time to visit Jura’s award-winning distillery, whose produce has kept us warm and high-spirited all day. Isle of Jura whisky is on the sweet side – easy to drink even for those unaccustomed to the taste.

Tours are free, as is the wee dram at the end. 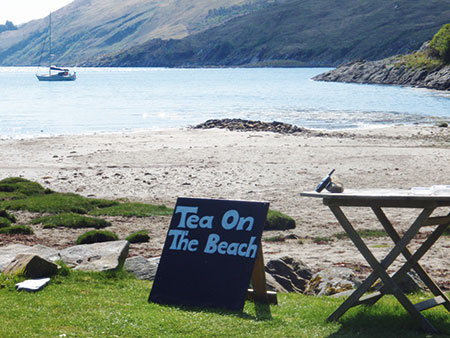 Distillery manager, Willie Cochrane takes us through the whisky-making process via mash tuns, copper stills, barrels for ageing and that all-important tasting room.

He tells us to knock on wood for luck before we glug Superstition, lightly peated with hints of smoke and spice and Jura Elixir, that’s as chewy and fruity as Christmas cake. It’s wonderful stuff.

And here, surrounded by the sea and mountains, I’d argue it tastes even better.

For rustic food head to the Jura Hotel where you can watch deer amble past the window while eating one in a pie.

Locally caught venison is a speciality. Mains start from £9.

Picnics can be ordered for £6.50 which includes a generous slice of homemade cake. 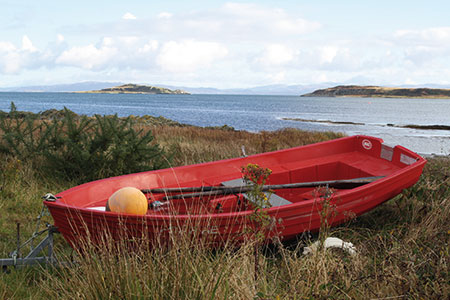 From March to October, The Antlers Bistro (Craighouse, 01496 820496) offers meals from 10am – handy before a heavy day of hillwalking. Take your own wine along in the evening and pay a very reasonable £3 a-bottle corkage.

The Jura Hotel is also home to the island’s only pub. But don’t panic, it’s a good one.

Beers are pretty standard, but the range of whiskies is exhaustive and the company welcoming and lively.

Find out about island life with a gossip at the bar. Pints from about £2.50. 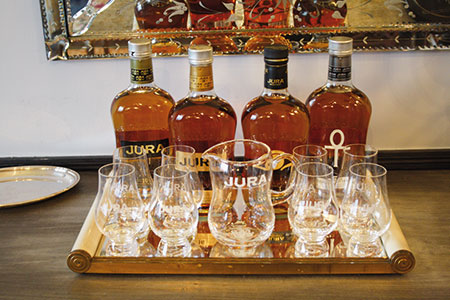 Unsurprisingly, Jura Hotel is the island’s only hotel, and is crawling distance from the distillery.

From April to November, it also offers camping. Rooms start at £40 per night.

British Airways flies from London Gatwick to Glasgow for £45 return.

Flybe flies from Glasgow to Islay twice daily from £41 one way. From here take the ferry to Jura for £1.35  ba.com;islayinfo.com; flybe.com